It is Time We Removed Inequality

Robert H Frank, an economics professor at the Johnson Graduate School of Management at Cornell University, wrote in the New York Times about the present financial crisis, comparing it with past times and using a new survey.

Incomes in the US rose at about the same rate, almost 3 percent a year, for all income levels in the three decades immediately after World War II. Prosperity extended across the whole population, irrespective of class. The country's infrastructure of highways, railroads, dams and bridges were well maintained, and new industries in communications, electronics and airlines were growing.

In the last three decades the economy has grown only slowly, infrastructure is decaying, and many people have trouble finding adequate work because industry is floundering.

Moreover the change in circumstances has not been evenly distributed. The share of total income going to the top 1 percent of earners, which stood at 8.9 percent in 1976, rose to 23.5 percent by 2007, but during the same period, the average inflation-adjusted hourly wage declined by more than 7 percent. The rich have been getting richer ever more quickly while the poor and the squeezed middle classes have remained static or lost out. The situation is plainly unfair and antisocial by any standard. 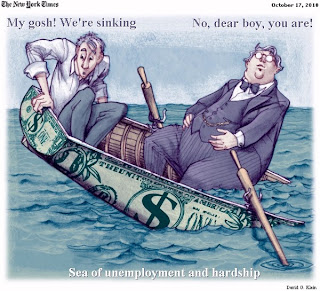 Societies must be founded on a sense of fairness and justice even if they are not unquestionably fair. The people of the US have been ready to tolerate a degree of unfairness in income and wealth distribution providing that they felt they had a chance of joining the wealthy by dint of personal effort, and proving that living standards generally improved because a large number of people were working in concert to build a better country. In short, providing that income was not distributed unfairly to a minority of the already rich while everyone else struggled.

Frank notes that the founder of modern capitalist theory, the Scot, Adam Smith, who wrote Wealth of Nations, the capitalist's bible, peppered it with trenchant moral analysis. He was, after all, a professor of moral philosophy at the University of Glasgow.

Yet rising inequality has created enormous losses and few gains, even for its ostensible beneficiaries, the mega rich class, who now have reason to worry that social instability will ruin them, if it is allowed to develop further. In any case, increasing riches alone never improves overall happiness once people have sufficient not to feel insecure. All that happens is that they notice that others are just as well off, and they then want another increase. Everyone wants to keep up with the Joneses, but these people are already loaded!

Families short on cash will try to make ends meet by moving to where housing is cheaper, usually farther from work. So, long commute times are another footprint of financial distress, and the counties where commute times had grown the most were those with the largest increases in inequality.

Even basic public services are no longer being properly maintained because of the persistent objection the rich have to paying their proportionate share of taxation. Rich and poor alike endure crumbling roads, weak bridges, an unreliable rail system, and insecure cargo containers, and many Americans live in the shadow of poorly maintained dams that could collapse at any moment. The right wing lobbyists and their academic parrots say nothing can be done, and most advocate policies like tax cuts for the wealthy that put the burden on the poorest in society.

There is no compelling evidence that greater inequality bolsters economic growth or enhances anyone’s well being. The rich remain a minority, though they hold a majority of the country's dollars. They can buy bigger mansions and host expensive parties, but it will not keep the majority employed and adequately compensated, and in any case the wealth of the rich is mainly invested abroad in places like China and India where the best rates of return can be had, and the exchange rate offer a hedge against losses. Then again the obscene bonuses wall street bankers and brokers pay themselves attract the most intelligent graduates, leaving vital sectors like industry, science, technology and engineering devoid of creative talent—and bang goes any competitive advantage we might expect to have in the future. Yet, any grifter can learn how to gamble in junk bonds but not how to succeed in science or engineering, or even in proper good stock picking.

No one dares to argue that rising inequality is required in the name of fairness. John Rawls in his theory of justice as fairness (A Theory of Justice) though inequality was only justifiable when the poor were nevertheless getting wealthier, albeit maybe not as quickly as the wealthy. So we should agree inequality is a bad thing, and do something about it.

In the UK, Professor Greg Philo suggested that the top 10% should pay a one off tax of 20% of their wealth. It caused some outcry, but surprisingly, a lot of wealthy people were willing to do it. They were the ones who realized it would be far worse if social unrest got so bad, especially if it were worldwide, as is the financial crisis, that all of their wealth might be threatened by social instability. They knew that the one off payment, though substantial, would repay itself if we got into a new ers of financial stability as a consequence. Their remaining investments would soon grow to pay back the lost 20%. Though the short sighted greedy rich would moan like hell until the benefits came through, everyone would end up happy.