Education not Poverty—Reclaiming What is Ours!

In the 2007, Trends in International Mathematics and Science Study test, students from Singapore took first or second place in all science categories. The United States ranked 11th.


The quality of our math and science education lags behind many other nations.
Barack Obama 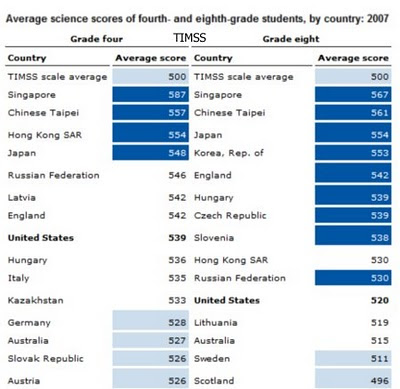 Mark Roth, a former science editor of the Pittsburgh Post-Gazette asks why do pupils, in a nation that is world leader in scientific research lag, behind other countries in science. Excuses range from poverty, poor training of teachers, disdainful attitudes to education and knowledge, the shockingly poor scientific illiteracy of American adults to the convenience of paying to import scientists and mathematicians from abroad where standards are higher. It is is actually cheaper for corporations to hire foreign scientists that for have to pay taxes to improve the US education service.


Meanwhile, the huge gap between students in affluent and poor school districts is reflected in racial disparities in scores. Affluent white kids in the US do as well as white kids in Europe. In the European Program for International Student Assessment, or PISA, American students as a whole scored 502 in 2009, slightly above the industrialized nation average of 500. Arthur Eisenkraft, a science education expert at the University of Massachusetts at Boston, said economic differences play a part in the discrepancy:


We’ve always known there are high correlations between poverty and how kids do in school.

The downside is particularly noticeable in large urban school districts like Pittsburgh. Only two of the 17 big city school districts that participated in the National Assessment of Educational Progress science tests, in 2009, had more than a third of their students scoring in the proficient range. Eight of the districts had more than half of their students below the basic level. Alan J Friedman, a science education consultant, emphasized that those who are below basic in science at the eighth grade level most probably will be freezing themselves out of a whole lifetime of advancement opportunities.


Part of the reason for the fall in test scores from the elementary school to middle school is attitude—and is shared by parents as well as kids. In Asian countries, doing well in science is considered to be by application, hard work, but Americans think it is whether you have a natural gift for a subject, aptitude, natural ability—you just don’t want to do it! Students say, “I’m no good at science, and that’s just how it is”. Being a “celebrity” seems a lot more fun!


Besides the need for effort, school pupils need to know how to analyze problems and work out the answers to them. But many teachers who teach science are poorly trained in it themselves. Many have not done science in college. It becomes particularly critical if the content is controversial, as in teaching evolution in biology classes. Lack of the proper training in science and evolution leaves teachers without the confidence to face up to aggressive Christian kids challenging them, especially when they have equally aggressive and sometimes influential parents coming into the school to complain. Many parents love Jesus so much that they love guns, and high school shootings have become popular recently.


The lack of scientific literacy in America is compounded by the determination of many US Christians no keep on sabotaging science on the grounds that all the answers necessary are in Genesis. All Genesis answers is what is in it, and whatever regard people have for it, it is not science.


Ultimately America, and much of the west—the UK is going the same way—needs proper regulation of corporate greed. If people are to work hard, they need rewards that seem proportionate—decent wages, apprenticeships and training schemes, and sposorship of education—but corporate America could not care less than it does about American society. If they could get people to work for nothing they would, and when industry is fully robotized, that will be the real situation.


But who then would be able to buy anything? Without money at the base of society, at consumer level, society collapses, and discontent rises. Intelligent young people already see it, experience it, and feel that education is pointless when the prospect of any work for most is negligible. Already there are places where hundreds of people compete for each job that becomes available. They wonder whether it is lucky or clever to take any such job, if offered, because they will have to work for peanuts under a perpetual threat of being fired. Why bother? It is easier and more lucrative to be a thief. Already vast swathes of the inner cities are dying or dead, because industries have moved to cheap labor countries, or to another state in the Union that will offer the biggest incentives—bribes.


Social responsibility has to be made an important factor in corporate decisions. It can be done by strictly enforced legislation. And should the corporate bosses decide to move abroad, then they should do it with the knowledge that their products will be heavily taxed if they are imported to the USA, and Americans domiciled abroad whose businesses have been moved from the USA, should be taxed as if they still lived in the USA. It is time the country was taking back what it has allowed a small body of people to take away—the nation’s jobs and wages.