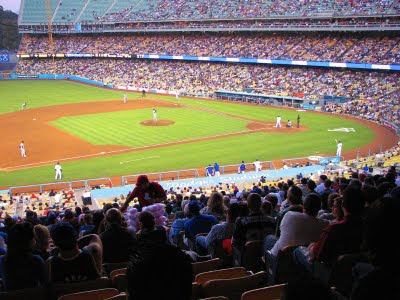 The LA Dodgers are bankrupt. They do not have the cash to pay their employees’ wages. We are talking about a community here. The Dodgers are a baseball team much loved by its many patrons, as sports teams usually are, whether big or small. And the Dodgers are bankrupt despite recent success—they made the play offs as recently as 2008 and 2009. Why then has this catastrophe engulfed the team? Andrew Gumbel of the UK Observer has explained it.

The fact is that the owner of the team has sucked them dry for his own aggrandisement. It should be a lesson for Americans, especially those who persistently defend the mega rich, people whom they do not know and never will, and people who are richer than they can ever imagine—America’s plutocrats, the corrupt and greedy rich.

Frank McCourt, not the deceased Irish novelist but a car lot magnate, bought the team and bled it dry to support a life of luxury for himself and his family. McCourt bought the Dodgers from News Corp, who had used it to build up a regional sports network. To do it, McCourt borrowed $150m from Bank of America, $75m from Major League Baseball and $196m from Fox, so he had not spent a penny of his own money.

McCourt then sliced off what was most profitable, the stadium car park and the ticket office as his own operations, which charged the Dodgers rent, and, in turn, giving McCourt security to borrow more dollars. He paid himself $5m a year, his wife, Jamie, $2m pa as chief executive, and their two children $600,000 each—one was a student at Stanford University and Goldman Sachs employed the other. McCourt also enjoyed a private jet and four luxurious houses in Hollywood and Malibu. In typical robbing financier style, the money and debt were spread among, and constantly moved between McCourt’s shell companies and subsidiaries to hide what was going on.

And what was going on was that the assets of the team were being stripped and moved into the personal accounts of a single family and a few hangers on.

Yes, it ought to be a lesson for the average American, whether poor and unemployed or middle class and imagining that they are well off. You just do not have a clue, especially you Tea Partiers taken in by rich men’s stunts to keep you on side. The invisible über rich of the USA are taking you all for the same sort of ride as McCourt took the community that supported the LA Dodgers. They are robbing you silly, and too many of you are defending them!

You cheer because they are sending your boys to distant lands to get maimed and killed, and they make money out of armaments and the vast support industry of the military-industrial complex that supports it. Often you don’t even get a badly paid job out of it. They manufacture more and more abroad in low cost countries. You lose your jobs, or the threat is used to keep wages down or to get concessions from the city and the state treasury, and all of it goes into pockets just as McCourt’s did. You don’t know what is going on because they are like McCourt experts in hiding it, and have a gigantic publicity service called the media to feed you anything to keep you confused and divided.

Get real! You Yankees are like the Dodgers fans—being conned!