The Bogus Zionist Claim to Palestine 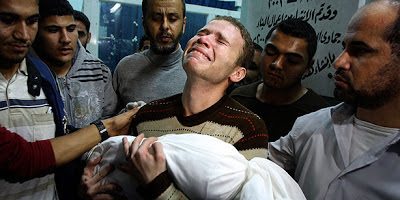 David and Goliath? Which is Which?

Some people are puzzled that anyone can support the Palestinians, because they are always presented as an Arab Goliath facing an Israeli David, but the truth is the reverse. The Israelis are the Goliath! Although they are only a small state, the Palestinians have even less territory, the Israelis having driven the Palestinians from their land, the land they had lived in for thirty or more centuries—the land taken from them by the Israelis. The ancestors of the Palestinians are likely to be the people who lived in the same place when Christ was there, give or take the immigration and emigration that has happened over 2000 years.

The Israelis are a modern technological country supplied with vast quantities of money and arms from the USA, but the Palestinians are not allowed to import anything without Israeli permission, and are deliberately kept third world. When they try to bring anything in from outside by sea—Gaza is on the coast—the Israelis pirate the merchant ships bringing in goods, illegally blockading Gazan waters. You must have seen it in the media. Gaza is, you see, not an independent state at all—that is what the Palestinians want—but it is effectively an Arab ghetto of Israel. All complaints against Israel are suppressed by the USA. The UN Human Rights Council has adopted more resolutions condemning Israel than it has all other states combined. From 1967 to 1989 the UN Security Council adopted 131 resolutions directly addressing Israeli deprivation of the rights of the Palestinians.

So Israel has all the power, the money, the modern weapons. The BBC and Sky make a lot of noise about the Gazans having crude Qassam rockets which they fire into Israel in retaliation for oppression by the Israelis, but these rockets are not guided and not accurate, not reliable and of limited range, being home made. The Israelis, as in this case where they killed the Hamas official whom they were negotiating with about a captured IDF soldier, create provocations to break truce agreements, then blame the Arabs, who, having no professional army, no modern weapons, no airforce unlike Israel’s sophisticated one, and no money, necessarily come off worse.

Why do it? To get more aid and support from the USA, to prepare for another incursion, this time against Iran, and to create a scare to be able to act tough just before an election, as in this case!

Who then in terms of power is the Goliath? It is Israel backed by the USA. To help the Palestinians peacefully, you can:

Lastly, it is important to realise that the Israelis are not equivalent to Jews. Many Jews, many even in Israel, do not support the actions of the Israeli government. Israel was set up as a consequence of a secular political ideology called Zionism. The most strongly devout religious Jews oppose Zionism, and consider Zionist land grabbing from the Palestinians to be a grave religious error, contrary to God’s will. Besides the Palestinians, we support these Jews who are also friends of the Palestinians. 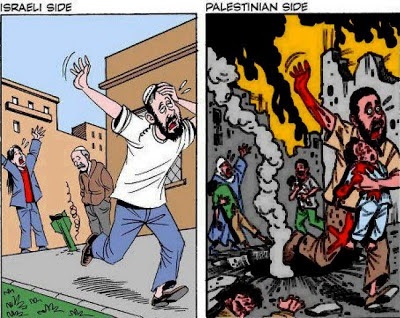 The Bogus Zionist Claim to Palestine

Zionists use the Jewish scriptures as a political weapon, just as they do the Nazi Holocaust. They claim that God gave the land of Palestine to the Jews in perpetuum. When was this? Sometime between 1500 BC and 1200 BC, they think, but nobody knows. The only evidence for it is the book of Jewish scriptures (the Old Testament, to Christians) which reads like an ancient history of the Jews, but which never turned up in recorded history until around 250 BC. Something written over a thousand years after the events it purports to record and sounds mythical rather than historical is overwhelmingly likely to be myth and not history, especially as no other source records it, only the Jewish holy books. So Zionists are claiming a land that has been occupied by the antecedents of the people who lived there, when the Zionists took over on the basis of a myth, for over 2000 years. Those people have more right to the land than the Zionists.

Moreover, pious orthodox Jews oppose the Zionists' claim to the land on the basis of the same Jewish scriptures. They agree that God gave the biblical Israelites the land but then say that God withdrew their right to it because of their sins and because God's plan required the Jews to be dispersed around the world to teach all men. When the Jewish messiah comes (they, of course, reject Jesus as the messiah), he will lead the Jews back to the promised land, and all men will follow willingly. They add that God did not plan for Jews to be murderers of other men, but their teachers.

Even supposing, the Jews did have some entitlement to the land 2000 or more years ago, it is ridiculous that they could claim it 2000 years later on that basis. Under Henry II, only 800 years ago, the British king ruled most of France. Are we to claim all that territory now with any justification? Only 250 years ago, the British king George ruled America. Are we to claim the US now? 2000 years ago, Italy ruled most of Europe and parts of Asia and Africa. Such claims are manifestly absurd, yet that is what the Zionists claim. So, by accepting the biblical argument, people are supporting the Zionists.

For a parallel that might bring the pain of the Palestinians to you, imagine that the Italians supported by some superpower, the USA, China or whoever, had invaded Britain with vastly superior weaponry, and had thrown us out of our homes and made us live in some overpopulated ghetto in an industrial wasteland in South Yorkshire, with no hope of ever getting our homes back. They had then, from time to time fired bombs and rockets at us and invaded us with ground troops. That is what it must be like for Palestinians. Zionists live in our houses and gardens while we grovel in coal tips with scarcely enough food to keep us alive. No one should be fooled by the crocodile tears of the Zionists.

The United Nations is a toothless tiger when it comes to Palestine, because they make their promises and declarations but never force the issue. The facts are that the Zionists in the US have an enormous degree of lobbying power in Washington. If you walk around Jerusalem, many rich Jewish Americans have streets and squares named after them.

Ernest Bevin, sometime UK Foreign Secretary, who was responsible for the British-Palestinian police, told the US that if they forced the British to allow the Jews to enter Palestine in the vast numbers that were trying to push in in 1946-47, there would be bloodshed till the end of time, and he was right. Zionist terrorist gangs like Irgun and Stern bombed Arab villages in Palestine to force the Palestinians to flee, and soon they had nowhere to go except vast refugee camps in Gaza and the West Bank. Gaza has been a vast refugee camp ever since. They also bombed the British, in the King David Hotel, for example, to force them out of the mandate they had undertaken. The US forced the issue by threatening to withdraw the Marshall plan that Britain needed to rebuild after WWII. That would have left Britain impoverished, so the British government were forced to accede to US/Zionist demands. The pair of bully boys have never looked back since. They have kept the Middle East in chaos for their own geopolitical purposes.

Sir Gerald Kaufman, a long standing British Member of Parliament and a Jew who was a Zionist and whose grandmother was shot in cold blood by a Nazi, accuses the Zionist Israelis of being Nazis when they attacked Gaza at Christmas/New Year 2008-2009.