The Case Against the EU 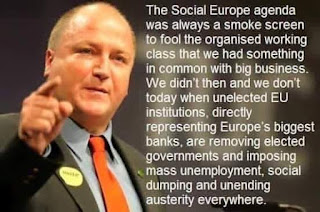 The response of the European Union to the 2007-9 global crisis lacked democratic solidarity, protection of individual rights and social renewal, exposing starkly the lack of proper democracy in the EU. Its forms of democracy were generally observed but not the content of them, and even the forms were sidelined by emergency measures.

National electorates had a free choice of whom they wanted in their parliaments but the parties thus elected had no freedom to choose their economic or social policies in response. Big business and big banks used an army of lobbyists to set the political agenda in Brussels and thus the equivalent policies by national governments. The electorate, especially the working class and those deprived of work, as well as small business owners, found themselves deprived of any voice in how they were governed—how they wanted to respond to the crisis.

Liberal democracy everywhere seemed blind to its own erosion, but the working class directly experienced the hardships of neoliberal EU policies which they had no means of influencing. The proletariat experience was that of a growing awareness of their loss of sovereignty, the issue that had motivated British trade unions, many in the Labour Party, and bold spokespeople like Tony Benn, to oppose the referendum of 1975 to Remain in the EEC—as the EU was then—after Heath had taken us in with no reference to the people's wishes.

Popular sovereignty is the working people and small business owners that rely on them having some influence on their living and working conditions. In ensuring the real participation of the lower class, liberal democracy has always been deficient and social democrats also failed to notice it. It has led to a growing sense of despair and powerlessness among poor workers who had seen their jobs and communities disappear. This was the cause of the mass protest visible in the Leave vote in the 2016 referendum. To ignore that protest will only exaggerate their despair, and lead to the response often seen in the last century, and increasingly today in the European Union—fascism.

The decline of democracy and loss of sovereignty indicate the shift the EU was intended to generate in favour of capital and against labour, leading to a escalating insecurity of employment, income, health care, social provision,pensions, etc. Meanwhile capitalists rapaciously appropriated national wealth, thereby vastly increasing inequality. These trends were happening throughout the capitalist world ever since Thatcher and Reagan had made greed and therefore neoliberalism respectable, but the EU with its "Social Chapter" conjured by Jacques Delors to persuade workers and particularly trade unions to get onside—and succeeding—rather than trying to counter inequality failed adequately to confront its own crises—like that of the Eurozone—continued to favour capital and worsened labour conditions, wages and social action needed to mitigate the problems.

On top of these systemic failures of the EU caused by its self inflicted legal obligations to favour competition, the migrant crisis—exacerbated by the US and Nato's military bullying of nations in the Middle East and North Africa—gave right wing, fascist and cryptofascist forces a perfect excuse to spread fear of a threat of alien hordes taking over white peoples' countries in Europe. Islam was again posited as the historic enemy of Christian Europe. It was an ideal excuse for the right to claim to be the guardians of national sovereignty as guardians of Christian Europe and claim popular leadership on all matter political.

Yet in the UK, for long a multicultural country with a national fondness for foreign food—Indian, Chinese, Italian—the fear was not of the Asian or African refugees so much as the impoverished workers from Eastern Europe entering because it was one of the EU's Four Freedoms, that of free movement, whereby these poor people were willing to undercut the wages and conditions of those working people here who were already suffering poverty and deprivation themselves. The aim of the free movement clauses of the four freedoms set in the concrete of EU law is precisely to boost capital at the expense of labour by the legal enforcement of the right of poor Poles, Rumanians and others to move to wealthier countries in Europe to undercut local wages and conditions, thereby cutting capital costs and maximising profits.

Those of us on the Left advocating leaving the EU do so because it cannot be a liberal--meaning free and fair—democracy when it is conditioned by immovable pro-capital, pro-competition laws built into the roots of its legal structures. It is "neoliberal", a modern economic ideology hearking back to Adam Smith's description of early capitalism in "The Wealth of Nations", but devoid of Smith's precautions. Smith considered Liberal to refer to the freedom of the bourgeoisie—the capitalist class—to do as it liked economically. Neoliberalism differs from it in that the precautions that Smith foresaw as needed in liberal capitalism—because it could be foolishly rapacious and potentially unstable, needing those limits to be placed upon it by the otherwise liberal state—could be bypassed and just applied in exceptional circumstances. Marx went much further in the next century, explaining that the intrinsic instability of capitalism meant that it could not be permanently managed. It was a sort of house of cards that could be built with care, and repaired to a degree, but ultimately would collapse. The periodic crises we find in capitalism are the equivalent of a few cards falling out of place and needing attention, but eventually there will be a terminal crisis leading to social revolution and socialism, often preceded by imperialist wars to grab the resources of other people like a burglar robbing a house when needing fresh funds.

These crises keep happening but so far the capitalist class, with the aid of its lackeys in government, have been able to avoid the collapse except in certain circumstances where the might of world capitalism us subsequently exerted by sanctions or military intervention to overthrow the revolution. So neoliberalism ultimately is a synonym for blatant capitalism and has little or nothing to do with what most people would understand as "liberal". Of course, the Liberal Party is capitalist as was New Labour, the remnants of which are still in the Parliamentary Labour Party and doing their utmost to stop us from leaving the EU.

Germany is the ascendant member of the EU, initially making use of its industrial leadership and favourable trade balance to become the EU's creditor nation, enabling it to force EU debtor countries to accept internally oppressive policies like market liberalism and austerity as conditions of its financial bail-outs—Greece being the archetypal example. Such adverse practices causing income maldistribution and weak demand, impacting on our high streets, is a consequence of the devotion of the EU to its capitalist and neoliberal bases in the treaties. Governments have to try to solve the crises in the interests of capital and competition at the expense of labour and the social policies that could mitigate the effects. Of course, the proper answer is to reject neoliberalism all together, as the Corbyn led Labour Party proposed to do, but for which an exit from the neoliberal restraints of the EU is essential. The social democratic attitude within the EU is precisely what is not needed—and the reason for its rapid decline—as exemplified by Martin Schulz, leader of the German Social Democratic Party in 2017 who argued that austerity could be stopped and national investment promoted by aiming to have a fully federal United States of Europe by 2025 (achieving what Hitler in Germany and his henchman Moseley in Britain wanted before the last war). As if to emphasise the EU attitude to democracy, he wanted to expel member states who opposed his plan. The UK could still be the first if leavers refuse to accept the establishment bullying and propagandising that has saturated the country in the three years since the decision was taken.

The social democratic left in the UK seem to hold similar views to Schulz, defending the EU in the name of socialist internationalism. They imagine the EU offers simply a neutral structure of union government and administration able to adopt and apply any policies based on their merits. The EU is, to repeat it yet again, structured in law to favour capital and obstruct labour. Inasmuch as this means industrial capital, it is the German industrial capitalists who benefit. The EU is beyond left wing reform. The notion that some campaign to co-ordinate left wing governments in enough countries simultaneously so that they can enforce a programme of anti-neoliberalism is utter fantasy, for even if it happened, restructuring the Eu would still be an almost insuperable problem. It is not in the least likely because the "democracy" of the EU is designed to make it essentially impossible. What is possible is to leave!

The democratic deficit of the EU is the reason for the popularity of the right wing authoritarian parties across Europe. The paradox is that the EU's own authoritarianism would suit them, if they were able to control the EU bureaucracy. To counter this menace the policies hitherto proposed by the Corbyn government need to be followed, and real socialist internationalism would be to use them to influence the left across Europe, whose own leaders have sold out to neoliberalism. These are policies to favour labour, strengthen democracy, regain sovereignty, and offer socialist rather than purely capitalist recipes for change could be spread from a successful implementation here.

In short the left must reject capitalist conformity and recapture its traditional radicalism. Not to do so leaves that field open to the bogus offerings of the ultra right and cryptofascists to gain even more strength from popular support, only to turn to their real masters, the capitalists and their militarists, once they believe the left has been out maneouvred and the working class have been conned.
Posted by AskWhy! Blogger at 1:01 PM

Most prostate cancers are adenocarcinomas, cancers that arise in glandular cells of the prostate’s epithelial tissue. Prostate cancers usually progress slowly and produce no symptoms in the initial stages. Eventually, the tumor may enlarge like mine too, the prostate gland, pressing on the urethra and causing painful or frequent urination and blood in the urine. So I was so uncomfortable with this prostate cancer diseases then I decided to do online search on how to cure cancer because I well have read a lot about herbal medicine, I came across a lot of testimony how Dr Itua cure HIV/herpes then Cancer was listed below the comment.with courage I contacted Dr Itua and he sent me his herbal medicine through Courier service then I was asked to pick it up at my post office which i quickly did. I contacted Dr Itua that I have received my herbal medicine so he instructed me on how to drink it for three weeks and that is how Dr Itua Herbal Medicine cures my prostate Cancer, The treatment takes three weeks and I was cured completely. Dr Itua is a god sent and I thank him every day of my life. Contact him now On:    Email:drituaherbalcenter@gmail.com/   Whatsapp:+2348149277967.
He listed that he can as well cure the following diseases below.... Cerebral Amides. Lung Cancer,Brain cancer,Esophageal cancer,Gallbladder cancer,Gestational trophoblastic disease,Head and neck cancer,Hodgkin lymphoma Intestinal cancer,Kidney cancer,Leukemia,Liver cancer,Melanoma,Mesothelioma,Multiple myeloma,Neuroendocrine tumors,Hodgkin lymphoma,Oral cancer,Ovarian cancer,Sinus cancer,Soft tissue sarcoma,Spinal cancer,Stomach cancer,Meniere's disease , Testicular cancer,Throat cancer,Thyroid Cancer,Uterine cancer,Vaginal cancer,Vulvar cancer. Alzheimer's disease,Autism,measles, tetanus, whooping cough, tuberculosis, polio and diphtheria Adrenocortical carcinoma. Alma, Uterine Cancer, Breast Cancer, Allergic diseases. Kidney cancer, Love Spell, Glaucoma., Cataracts,Macular degeneration,Cardiovascular disease,Lung disease.Enlarged prostate,Osteoporosis.Generalized dermatitis,Alzheimer's disease,Brain Tumor,Lupus,Endometrial Cancer, cerebrovascular diseases
Dementia.Colo rectal cancer, Lottery Spell, Bladder Cancer, Skin Cancer,Ovarian Cancer,Pancreatic Cancer, HIV /Aids,Brain Tumor, Herpes, Non-Hodgkin lymphoma, Inflammatory bowel disease, Copd, Diabetes, Hepatitis