Chimpanzees Only Cooperate With a Fair Distribution of Rewards! 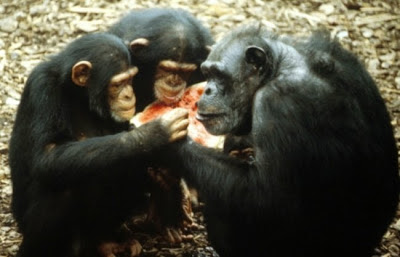 The Yerkes National Primate Research Center's research programs are exploring how the interaction between genetics and society shape who we are, and advance knowledge about the evolutionary links between biology and behavior. Researchers there, at Georgia State University and at Emory University, have shown chimpanzees (Pan troglodytes) have a sense of fairness that was once thought as uniquely human. It suggests a long evolutionary history of the human aversion to inequity as well as a shared preference for fair outcomes by the common ancestor of humans and apes. One of the authors, Frans de Waal, says:

Until our study, the behavioral economics community assumed the Ultimatum Game could not be played with animals or that animals would choose only the most selfish option while playing. We've concluded that chimpanzees not only get very close to the human sense of fairness, but the animals may actually have exactly the same preferences as our own species.

As a direct comparison with our chimpanzee relatives, the study was extended to human children. Six adult chimpanzees and 20 human children (ages 2 – 7 years) played the Ultimatum Game. The game was played with a pair of subjects, one chosing between two differently colored tokens that could be exchanged for rewards—small food rewards for chimpanzees and stickers for children—subject to their partner's cooperation,. One token offered equal rewards to both players, whereas the other token favored the one making the choice at the expense of their partner. The chooser handed the token to the partner, who exchanged it with the experimenter for food. Thus, both partners had to agree so as to get the reward. Another author, Darby Proctor, added:

We used the Ultimatum Game because it is the gold standard to determine the human sense of fairness. In the game, one individual needs to propose a reward division to another individual and then have that individual accept the proposition before both can obtain the rewards. Humans typically offer generous portions, such as 50 percent of the reward, to their partners, and that's exactly what we recorded in our study with chimpanzees.

It suggests that cooperation in our relatives, the chimps, and our own species, depends upon fairness but requires the opportunity to object to, and, one surmises from other studies, to punish selfishness. The study invites consideration of the effects of unfairness in human societies, in such as the development of the law, institutions like trade unions, protest, and revolution! It seems we will respond to perceived unfairness. The distribution of wealth in the world, especially the western world is grossly unfair, and might suggest we are heading for a period of social upheaval in protest.