Professor Yaneer Bar-Yam, President of New England Complex Systems Institute (NECSI), and his team of analysts support suspicions that a type of market manipulation called bear raids played a role in the market crash at the beginning of the financial crisis in November 2007. Any bear raid would have been prevented by a regulation that was repealed by the Securities and Exchange Commission (SEC) in July 2007. The regulation, known as the price test or the “uptick rule”, meant to prevent manipulation and promote stability was in force from 1938 as part of the government response to the 1928 market crash and its consequences.

At a critical point in the financial crisis, the stock of Citigroup was attacked by the bear raid—traders sold stock they did not own (so called “borrowed shares”) with the expectation of buying the stock cheaper when the price fell (“short-selling”) thereby getting a profit from trading in a falling market. If enough rich do this in cahoots, the glut of lower priced stock actually causes the price to fall, inducing panic selling by other price watching traders—or their price watching robots! Thus the risk can be totally eliminated by coordinated trading like this. Of course, if a single trader is wealthy enough, it might be that no co-ordination is needed! 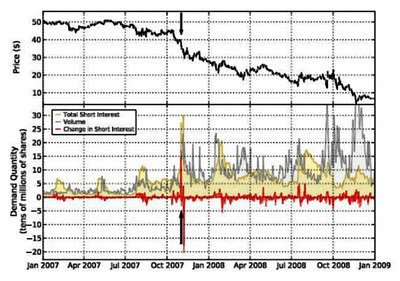 Through its analysis of stock market data not generally available to the public, namely the “borrowing” of shares, NECSI reconstructs the chain of events. On November 1, 2007, Citigroup experienced an unusual increase in trading volume and decrease in price. This decline coincided with an anomalous increase in “borrowed shares” by 100 million shares, valued at almost $6 billion, the selling of which was a large fraction of the total trading volume. The trading on November 1 was almost four times the usual volume. The newly borrowed shares represented over three-quarters of the volume on that day, driving prices down by almost 7 percent. The selling of borrowed shares cannot be explained by news events as there is no corresponding increase in selling by share owners. A similar number of shares were returned on a single day six days later. By the time the shares were returned, it had dropped nearly 20 percent. The magnitude and coincidence of borrowing and returning of shares is evidence of a concerted effort to drive down Citigroup’s stock price and achieve a profit, ie, a bear raid.

This was no coincidence. Professor Yaneer Bar-Yam maintains:

When 100 million shares are borrowed on a single day and then returned on a single day, the evidence that this is a concerted action is hard to refute. The likelihood of such an event happening by coincidence is one in a trillion.

The NECSI scholars are concerned that the incident was allowed to happen. Selling shares to deliberately cause a price drop, to induce others to buy or sell is illegal. Interpretations and analyses of financial markets should consider the possibility that the intentional actions of individual actors or coordinated groups can impact market behavior. Markets are not sufficiently transparent to reveal even major market manipulation events. Regulations are needed to prevent intentional actions that cause markets to deviate from equilibrium and contribute to crashes. Bar-Yam said:

There used to be a rule that prevented it from happening by forbidding borrowed shares from being sold in large blocks that drive the price down. Last year, the authors of the report sent preliminary results of their study to the financial services committee of Congress, and Congressmen Barney Frank and Ed Perlmutter sent it to the SEC.

Unfortunately, the SEC has not acted to identify or prosecute those responsible or to prevent its occurring in the future. Enforcing the law after it is violated is much less effective than preventing it from happening in the first place. Enforcement actions cannot reverse severe damage to the economic system. Prevention may be achieved through improved availability of market data and the original uptick rule or other transaction limitations.

After the market crash, the SEC received thousands of requests from the public to reinstate the price test rule. Hedge funds that invest the money of wealthy individuals opposed its reinstatement. Eventually, the SEC put into place an “alternative” rule that only applies a price test when the price of a share drops more than 10 percent, but that is insufficient. Professor Bar-Yam points out:

This watered-down rule would not have stopped the bear raid on Citigroup on November 1, 2007. This is only one example of the deleterious effects of the weakened rule. The overall effect of unregulated selling of borrowed shares is surely much larger and continues today.