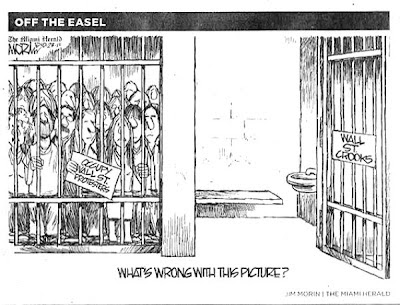 So Barclays Bank have been fined a fortune for fiddling their books in cahoots with other banks to seem more prosperous than they really were when other banks were in dire muck a few years back. Bob Diamond, Barclays CEO has offered to forgo his bonus this year, presumably therefore accepting responsibility. He was in charge of the fiddling division at the time. What an honest Joe he is!

My understanding is that insider trading is a serious crime. How is senior bankers fiddling interest rates to their advantage any less a serious crime? How is it even possible. We poor dumbos down here thought interest rates were set by governments or by a state bank, the Bank of England in the UK, but now we find that is not so. bankers set their own rates, and evidently can set them to their own advantage.

Can we be told why an autistic computer hacker can be extradited to the USA for alleged potential threats to computer networks, with the prospect of a long period of incarceration in some US semi-feudal dungeon full of violent muderers and psychopaths, but the genial, smiling mega crook, Bob Diamond, is not even investigated by the police here in the UK?

And whose money pays those massive fines? Is it Diamond's? Even his annual bonus of £several million is puny by comparison, and he is careful to tell us he will not be receiving it this year. Next year he will receive double to make it up!

This man and his weaselly fellow crooks throughout the bent banking kingdom should be arrested and properly brought before the courts of justice, with no permissible excuses like suspected senile dementia, no last minute conversions to the way of God, truth and light, and no fobbing off the case with some legal technicality. All of these have been used to get rich crooks off the punishment they deserve. Where then are the police? Where are the MPs asking questions like these in defence of the rights of the citizens who elected them?

The truth is that they are all cheaply bought by men like Murdoch and the bankster mafiosi. If no one in public office demands action over this criminality, then we know what a diseased state western society has fallen into. All our public servants are greedy opportunists, cheaply bought by latter day robber barons. Are there any honest people of principle left in public office? If so, let them show themselves!