The Thirty Year Assault on the Middle Classes 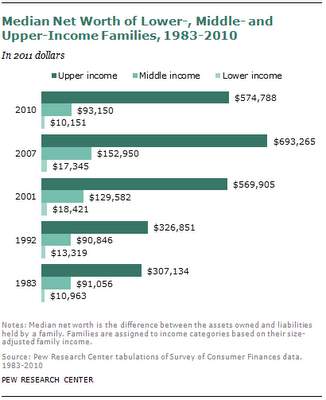 A national Pew Research Center survey has found that, since 2000, the middle class has shrunk in size, fallen backward in income and wealth, and shed some of its characteristic faith in the future. Interviews with 1,287 adults, describing themselves as middle class—adults whose annual household income is two thirds to double the national median, ie $39,418 to $118,255 in 2011 dollars, incomes adjusted for household size and scaled to a three person household—were combined with with data from the US Census Bureau and Federal Reserve Board of Governors.

85% of these middle class people say it is more difficult now than it was a decade ago for them to maintain their standard of living. Of this 85%, 62% say much of the blame lies with Congress, 54% say it is with banks and financial institutions, 47% say it is with large corporations, 44% with the Bush administration, 39% with foreign competition and 34% with the Obama administration. Just 8% say a lot of the blame is with the middle class itself.

For the first time since the end of World War II, in the decade 2000-2010, mean American family incomes in all income levels declined. But this middle income level is the only one that also shrunk in size, a trend that has continued over the past four decades:

The fall in this level of the middle class was by some getting richer, and some by them getting poorer.

These figures plainly show that most of those considering themselves middle class are being conned by the state, academia and the media. Frankly, they are poor! Even what is the middle level of the middle class is not really well off, and that wealth is declining, leaving only the truly middle class, those who are well off by any standards, albeit not in the megarich class, are getting richer.

The reason is plain in this figure from the Pew Survey with some annotations. 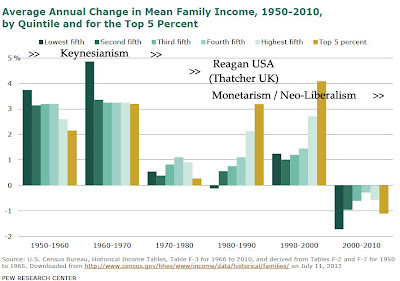