Ed Miliband has continued Labour’s efforts to win back credibility on the economy by echoing a statement from Ed Balls, the shadow chancellor, that Labour cannot promise to reverse any coalition spending cuts. 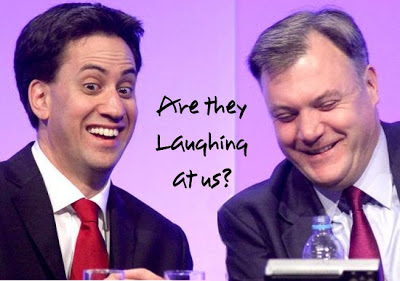 Robert Griffiths, General Secretary of the Communist Party of Britain has invited workers, trades unionists, and socialists to discuss an open letter addressed to them regarding the policies being advocated by the Labour Party leadership.

At the beginning of 2012, the Communist Party published the first edition of its Open Letter, rejecting the statements from Labour Party leaders on public spending cuts, public sector wages and pensions and on welfare benefits.

Those statements broadly confirmed the Labour leadership’s support for the rationale and approach of the Tory-led government towards these issues.

This wrong approach has not changed fundamentally. Arguing that the cuts should be a little less deep and a little more prolonged is still to accept the logic of the blue and orange Tories, City of London bankers and speculators and the EU. Nor is it an approach that has either cut the public spending deficit or stimulated a private sector-led economic recovery.

That is because it was designed to do neither.

The real intention of Tory strategy, dictated by the City and backed by the EU, is to prepare the public sector for wholesale privatisation. In that sense, the strategy has not failed. It is on course to deliver privatised services to big business, while also undermining trade unionism and cutting wage and pension bills and taxes on the wealthy. Regionalised pay is intended to accelerate the drive. The austerity and privatisation programme is working—for the ruling class.

Below is the joint statement issued by 16 communist and workers’ parties in Europe in May 2012, which places Britain’s economic and financial crisis—and responses to it—in a wider international context. Please read and discuss these statements with friends, workmates, trade union colleagues and comrades. We urge you to raise these issues in your trade union and political organisations.

The Crisis of Political Representation in The British Labour Movement

The policy of the Labour Party leadership to align itself with this analysis and these remedies is a betrayal of the millions of workers and their families who should be able to look to Labour for support and solidarity. Statements by Ed Miliband, Ed Balls and other Labour shadow ministers in support of deep cuts in public sector wages and pension entitlements, and in welfare benefits, represent a shameful capitulation to the banks, the Tory-led regime, the right-wing mass media and the EU.

The refusal of the Labour Party leadership to fight for policies to defend public services, jobs, wages and pensions and so revive economic growth highlights the extent to which the interests of the labour movement—which are also those of the people of Britain generally—go largely unrepresented in the House of Commons.

The leaders of Labour-affiliated trade unions know that their members need a Labour Party that defends their members’ interests. In addition to the widest possible mass movement, it should stand up for public services, oppose the whole rotten set-up in corrupt, big business Britain, and renounce an imperialist foreign policy that mires us in aggressive war, the mass slaughter of civilians, international kidnapping and torture and a new generation of nuclear weapons.

At the same time, this is part of an important, even bigger question:

This challenge must be faced by the whole movement, including those unions not affiliated to the Labour Party.

The Labour Party was founded by the trade union movement. It still receives the support of over one-third of voters. But this support is not guaranteed and could quickly disintegrate if the party’s right-wing course is maintained. The trade union movement, and its members locally, have a duty to intervene to reclaim the party as an essential voice and vehicle for the interests of working people. Affiliated unions should:

Affiliation fees should be maintained to step up the challenge to the Labour leadership’s current policies from inside the party as well as from outside. We believe that these kind of initiatives, combined with mass popular campaigning and action across Britain, are the most realistic and effective steps that can be taken towards achieving real representation of working people’s interests inside the Westminster parliament.

However, should the Labour Party continue on a right-wing course up to and during the next General Election, the trade union movement and the left will have a duty to consider what further steps may be necessary to ensure that the labour movement has its own mass party, one capable of winning elections, forming a government and enacting policies in the interests of workers and their families.

The perspective may need to change from one of the labour movement struggling to reclaim the Labour Party to that of re-establishing a mass party of labour. Affiliated trade unions may need to convene an all-Britain conference to discuss the crisis of political representation for workers and their families. The TUC will have to resume its historic responsibility and convene a special conference of all labour movement organisations to discuss the political representation of the labour movement in the House of Commons.

In the meantime, the labour movement must fully recognise the scale of the threat now being posed by the current ruling class offensive—fronted by the Tory-led regime—to working class rights and living standards. United mass, popular resistance still needs to be built to this government, based on a clear understanding of the class forces and interests that stand behind Tory policies.

In the Communist Party’s view, it is vital that the resistance to this offensive also projects a bold and unifying alternative economic and social strategy. This is where the People’s Charter can play an invaluable role, setting out the policies to rebuild Britain’s productive economy, enhance our public services, secure greater social justice and protect our environment. Pointing a way forward in the immediate battles will help create more favourable conditions in which to resolve the labour movement’s current crisis of political representation.

For its part, the Communist Party will continue to develop its Marxist analysis, project an alternative economic and political strategy for the working class and its allies and strengthen non-sectarian left unity.

Statement of Communist and Workers’ Parties in Europe, May 1, 2012
For Maximum Opposition to the EU Treaties

The European Union and the ruling classes of the member states are determined to make working people pay a very heavy price for the deepening crisis of the system. We Communist and Workers’ parties of the member states of the European Union call on workers across the EU to resist and oppose the adoption of the Treaty on Stability, Coordination and Governance in the Economic and Monetary Union and the revised Treaty on the European Stability Mechanism (ESM).

These two treaties would make “Eurozone” member states and practically all other countries signing these agreements into permanent regimes of economic austerity involving deeper and deeper cuts in public expenditure, rises in indirect taxes, reductions in wages, sustained liberalisation of markets and privatisation of public enterprises, services and vital national assets.

The strategy is to have low wages, low public spending, mass poverty and workers having few rights. The treaties are designed to make these measures into a permanent feature of the EU that are impossible to reverse.

The impact of these treaties will not be confined to the member states of the Eurozone. They will provide the bench-mark for further attacks on workers’ rights and conditions across the whole of the EU. The ruling classes have declared open warfare on workers in a generalised offensive.

These treaties are designed to neutralise the potential of national working class formations to influence or change national economic and social policy. They, along with previous treaties, are about blocking any avenues for the working class to defend itself or to promote policies of social progress and a socialist alternative.

They will make austerity permanent by continuous external interference of EU institutions in the affairs of member states in relation to economic and social policy, in the interests of monopoly capitalism.

In this they have the active collaboration of the ruling class and its political representatives in each country. These treaties will further negate and deeply undermine national and sovereign rights. Any policies that the ruling classes across the European Union can deliver will inevitably make the people pay for this crisis of capitalism. Promoting the interests of the working class is only possible by confronting and breaking with this destructive system.

We, Communist and Workers’ Parties value and salute the mass response from the workers and other social strata affected by the measures and policies of big capital, in Greece, Ireland, Portugal, Spain and Italy and call upon workers and their trade unions, and people’s mass organisations, to resist these renewed attacks and to mobilise and assert a working class response to the crisis of state monopoly capitalism.

In the immediate battles of today our parties will present the vision of Socialism as the answer to the crisis of the capitalist system.