Re-posted from The Morning Star. 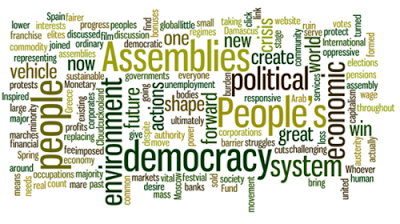 Norfolk People’s Assembly has been at the forefront of the battle to beat the Tories. David Peel explains how the group has had such an impact


Look around. Our country is being torn apart. People are suffering and dying. Lives are being wrecked. Public services destroyed. Changes we never believed possible are being forced through against our wishes. They call it "austerity forever"—the idea of a handful of arrogant, aloof Eton public schoolboys and their rich friends.


However, as Karl Marx once said about capitalism, they are creating their own gravediggers. The British people, true to centuries of tradition, are rising like lions. We are on the move and our movement is called the People’s Assembly. Our message is simple—no cuts, no austerity, and if it won’t listen, no coalition government.


Since we launched in June last year around 100 assemblies have sprung up across Britain, rooted in local communities. This is our movement’s great strength, and why we are here to stay. We have united thousands of activists and campaigners with ordinary people, many of whom have never been involved in this kind of “politics” before. And we don’t get together to bemoan austerity. We plan and take action.


In Norfolk, this has been particularly successful—but why? And what drives us?


Here’s one reason. People with severe mental health needs in this county and in Suffolk are taking their own lives in utter despair as a direct result of cuts in services.


When Norfolk People’s Assembly was told about these deaths from comrades in the mental health services we took action straight away and occupied the constituency offices of “Care” Minister and local MP Norman Lamb. We filmed a statement from inside his office, rightly blaming him and his coalition for the deaths, and uploaded it to the internet. The minister was dragged kicking and squirming onto the media to answer the charges. Thousands saw our angry message and witnessed his discomfort. Today the campaign against mental health cuts which have plunged the service into crisis is one of the biggest, most active and successful we have seen in years. Mental health staff, patients and carers have been given the confidence to blow the whistle and fight back. They now have the mental health trust board of directors by the balls, and their campaign is saving lives. It was kick-started by a People’s Assembly initiative.


Here’s another reason. Today in Norfolk, no coalition cabinet minister dares breeze in, make a few sham announcements and breeze out again. They are met with vigorous protests. When Prime Minister David Cameron visited, demonstrators crowded round every entry to the TV studios where he was to be interviewed. Those who later saw the broadcast said he looked rattled. I didn’t see it. I was inside a police station, under arrest for attempted criminal damage to his armoured Jaguar car having thrown a small cardboard placard at it—allegedly. The Crown Prosecution Service recently dropped their case. On local radio, listeners calling a phone-in about the incident backed our action, criticising the media for its craven attitude to coalition ministers. When Chancellor George Osborne came his car was surrounded and stopped by our activists. It disrupted his speaking engagement. We were interviewed by the media, catapulting the People’s Assembly onto news bulletins watched by tens of thousands. No coalition minister—or shadow minister who supports austerity—should be able to visit any People’s Assembly area, anywhere in Britain, without protests.


Here’s a third reason for our success. When Norwich City Council threatened to evict families for bedroom tax arrears, we put down a public question, then turned up the volume with a highly visible Spanish-style pots and pans protest outside. Inside the chamber we were verbally abused by ruling Labour group councillors, but we extracted a precious and very public promise from the deputy leader. No tenant would be evicted for bedroom tax arrears. It put us—and the council pledge—on the front of Norwich evening news.


We are not fools. If the council betrays its pledge, we will have a "stop evictions network" of activists around any home threatened by bailiffs. They shall not pass. We have marched, occupied banks like Virgin, shops like Primark, stood on picket lines with firefighters, handed out leaflets at schools supporting striking teachers and hassled local MPs like Brandon Lewis, Chloe Smith and Simon Wright. We are the self-appointed official opposition to austerity in Norfolk where every mainstream political party is implicated in hundreds of millions of pounds of cuts.


Our activism never ceases, as readers of the People’s Assembly house newspaper the Morning Star will know. Every local assembly in Britain planning action should be telling the Morning Star. This is the only daily newspaper on sale round this country which is fighting austerity tooth and nail. In Norfolk, we have a sympathetic newspaper too, the Kett Gazette, named after home-grown rebel leader Robert Kett. We always warn visiting coalition ministers that they will get "a robust Kett county welcome" if they come here.

In just six months Norfolk People’s Assembly has transformed the best activists in the county into a force to be reckoned with. We spoil coalition PR opportunities, put anti-austerity on the agenda and inspire others to join us and fight back. Action is the life of all. People join us because we take action. We have courage and commitment, but don’t get us wrong—we are not hotheads. Our actions are thought through. Campaigners come to us because we have experience. We can organise demonstrations, liaise with police, set up and speak at public meetings, lead occupations, ambush ministers, hold councils to account, lobby charities and churches and build networks which are broad and strong.


Our media profile is strong. We pour out information, shaping the debate and thinking around austerity. We never get defensive when criticised but stay upbeat, positive, and proactive. Our campaigns are creative and imaginative. We cannot be ignored. We have earned respect.


We are led by women, most of our officers are women, the majority at our meetings are women. Women alongside the disabled are hardest hit by this austerity. We are inextricably bound to trades councils and trade unions fund us. We go to union meetings. They come to ours. It gives us a militant, organised edge. For the first time in years, we are bringing members of the public to strikers’ picket lines.


The People’s Assembly is about to step up several gears. Perhaps here in rebellious Norfolk we have blazed a trail. Here might be one strategy for growing this movement in our communities, taking it to a place in our national life where we can turn the tide of austerity, and history, and bring this unelected coalition down.