Talking Back against European Union Naivety

The Germans are wonderful people in my limited experience of them, and so are most other Europeans, and their parties are doubtless heavenly compared with the Tories, but it is all quite irrelevant to our being all members of the same EU international bund.


The EU was set up as the Common Market to be run by bureaucrats with a mockery of a parliament, and it still is 40 years later. Knowing that, and the rest that we now know, would any of us want to vote “yes” in a referendum today? We are told the EU is not imposed on us externally. We have freely joined it. Then why cannot we decide to exit it? Because it suits our ruling class, which, some say are worse than the ruling classes of our fellow Europeans, but our rulers are not so stupid they do not realize they are stronger while they have these virtually unbreakable ties with almost every other country in Europe, not to mention the threat of NATO looming in the background should anyone show dissent. It is harder to blow a hole in a big wall than it is in a small one, it is harder to untangle a large skein of legal threads than a small one. The longer we stay in it the harder it will be to get out.


And it seems we shall soon have another layer of courts to deal with, besides the ECJ, as a condition of the TTIP. If EU membership offers us any crumbs of benefits, the shackles and conditions imposed for them render them worthless.


In discussing our predicament in the EU, some light-hearted contributers, think it is fun to propose various hypothetical stances, but we actually are in a real situation, right now! It has never been the game some depict it as. While we remain in the EU, all thoughts of socialism are wishful thinking—the very rules of the neoliberal club exclude it. And for those who are loath to lose their European identity, we were Europeans before we joined the EU. If we leave it, we shall still be European, besides being British. That we would be rejecting the people of Europe by leaving the EU has always been one of the main false lines of the pro-European media. Lastly for those of a Marxist inclination… 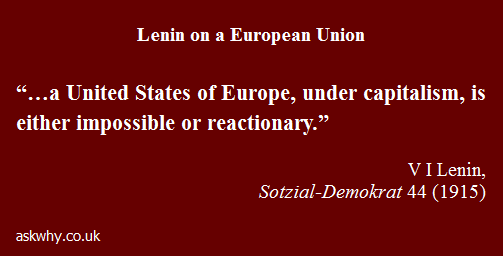