Some Opinions on the Flawed US Electoral System 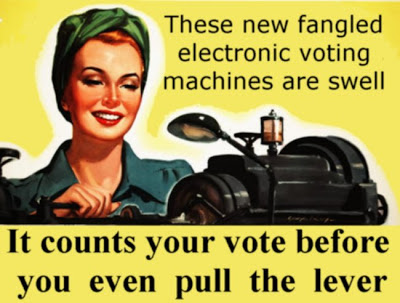 The US boasts it has free and fair elections. Only, though, while American politicians pretend the US electoral system contains no flaws:

A “double standard” is a rule or principle that is unfairly applied in different ways to different people or groups. Respecting every single voice is key in a democracy, but voter suppression is constant in the US.

Our citizens are kept away from the voting booth by rules that are meant to keep away a certain segment of the population, we have a lot of nerve, frankly, criticizing other countries for the way they run their democracies.
Brad Friedman

There is an attempt to prevent large numbers of people from actually exercising their ballot.

We monitor other people's elections, of course! And if they don't allow it, they are cheating, it’s not democracy, it’s rigged, it’s a dictatorship, what the hell?!

Election monitors usually serve the purpose of keeping track of electoral discrepancies. When election ideals are not met elsewhere, criticism runs rampant, but the same goes for domestic observers. The US use of election machines stops adequate monitoring. Nobody knows what happens behind the scenes in an election machine. It’s the Florida swinging and hanging chad system writ large!

Michael Shamos, a computer scientist at Carnegie Mellon University who has examined voting machine systems for more than 25 years, estimates that about 10 percent of the touch screen machines “fail” in each election. A single knowledgeable technician could fiddle a whole state vote, the Washington Post found. Jonathan Simon, co-founder and director of the Election Defense Alliance said:

When you are looking at an election where the votes are counted in public, by humans, it’s the kind of election that is possible to observe. There really is virtually no opportunity for international observation… Even the Carter Center, which goes abroad and does the great work of monitoring elections abroad, refuses to monitor US elections on the grounds that they don’t meet the basic standard of integrity.

While nitpicking abroad is all the rage, the elephant in the room remains unnoticed at home. Mark Crispin Miller, a NYU Professor, said:

Obvious flaws like the utter dependence on huge wealth, the limitations of a two party system which perpetuates itself, are always met with a deaf ear. Ted Rall says:

Our policy makers, and to a great extent our media, and by trickle down, the American people, literally think the rest of the world is stupid. That everybody naturally has to admire us, that we’re great—and it’s not the case.

Meanwhile, the flawed election process persists with every vote cast in the US.