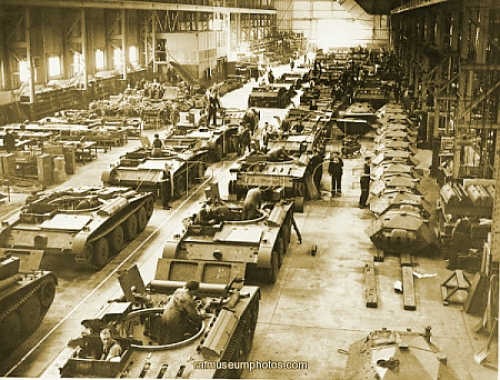 The Great Depression (1929-39) was the deepest and longest-lasting economic downturn in the history of the Western industrialized world. In the United States, the Great Depression began soon after the stock market crash of October 1929, which sent Wall Street into a panic and wiped out millions of investors. Over the next several years, consumer spending and investment dropped, causing steep declines in industrial output and rising levels of unemployment as failing companies laid off workers. By 1933, when the Great Depression reached its nadir, some 13 to 15 million Americans were unemployed and nearly half of the country’s banks had failed. Though the relief and reform measures put into place by President Franklin D Roosevelt helped lessen the worst effects of the Great Depression in the 1930s, the economy would not fully turn around until after 1939, when World War II kicked American industry into high gear.
History: The Great Depression

After a decade of depression, the great economic innovation in the wartime USA was the creation of an immense flow of credit to support the construction of industrial plant and equipment for the war effort. The US government willed the ends—of vast steel factories, great new production facilities for ships, aircraft, and armaments—and willed the means, by authorising the Federal Reserve Bank to create credit for business expansion. This is the secret of rapid economic development. Allowing banks and the government to create credit allied with businesses borrowing to invest that money, then the economy will prosper.


The public debt and investment credit created to fund these vast programs was rewarded by immense productivity gains made by American industry. From 1938 to 1944, economic growth increasing on average by over 12 percent pa, industrial production booming at over 20 percent pa, productivity per head up by 8.5 percent pa, industrial construction climbing at70 percent pa. USA productivity was up 64 percent per capita. The output of the economy increased in constant $2005 prices from a trillion dollars in 1938 to about two trillion dollars in 1944 (http://en.wikipedia.org/wiki/File:US_GDP_10-60.jpg). The USA of 1946 had over 50 percent of the production capacity of the market economies of the world.


But the doctrinaire capitalist US Government regarded economic planning as an unfortunate, neo-socialist wartime necessity. After the war, under President Harry Truman, it abandoned the Investment Credit Creation procedures which had won the war, and all forms of industrial development policy. Consequently, the American economy declined to the modest growth rate of two to three percent pa. First Japan, then China learnt the lessons. Deng Xiao-Ping's China was not scaared of socialism and introduced Investment Credit Creation from the mid-1970s. That is why China has grown so dramatically in recent years. It also points the way for the western world battered by austerity. Socialism is the answer, even if it is limited to war socialism.


More at London Progressive Journal...
Posted by AskWhy! Blogger at 12:17 AM