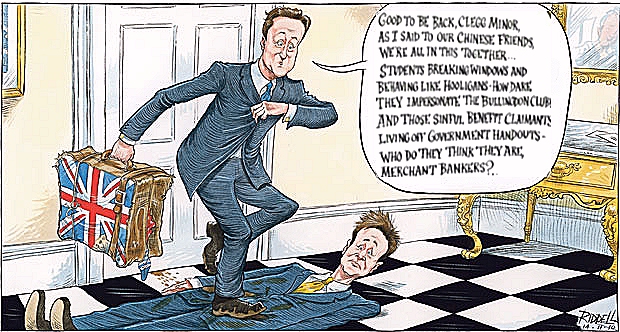 Cartoon by Chris Riddell from Guardian Newspapers and the Observer.


David Cameron is the British Prime Minister. He is a toff, a man with very rich parents who had a very expensive education, the best you can buy in the UK. The British Deputy Prime Minister is Nick Clegg. He is another toff from a banking family, and had a superior education, albeit not quite in the Cameron bracket.


Cameron is a Tory, the traditional conservative party of the UK, while Clegg is a Liberal Democrat, but the two have united in a coalition government against the New Labour Party created out of the traditional Labour party by the machinations of one odious opportunist, Tony Blair. The New Labour Party became unelectable because of the lies, spin, lack of principle, and the general careerism and dishonesty of most of Blair’s pick of grifters who stepped forward to be selected as a candidate for New Labour in the Blair and Brown years.


Clegg’s party pretended to have taken the mantle of the old Labour party in standing up for the ordinary worker and the middle classes, the old, the disabled, the deprived, and generally those struggling to manage in a world increasingly designed to favor the sharks and other financial raptors. But he welched on his promises, and joined David Cameron in the most vicious attack on the standards of anyone less than minted in almost a century.


Clegg, however, leads the junior arm of the coalition, and hence he is depicted as a doormat by Chris Riddell, having to endure the muck and mud of popular ire, and growing sense of betrayal by the Lib-Dems, because the attack on the people would have been impossible without Liberal help, and their full ire would have been directed against Cameron’s Tories.


As it is, the anger is growing, the pressure is mounting. Already students have wrecked the entrance of the Tory HQ on Millbank in London, knowing that good humored, quiet, and orderly demonstrations never get the demonstrators anywhere. They are ignored or subverted from their original aims.


Look at the orderly million strong demonstrations against the Iraq war. The antiwar feeling was rapidly extinguished and turned, by ceaseless military publicity and propaganda, into pro war sentimentality and “charities” like “Help The Heroes”, a way of keeping in the public eye the “heroism” of our soldiers killing peasant farmers, their wives, daughters and sons, in their own homes and homeland 4000 miles away.


All of this is meant to distract public attention from the way they have been robbed of trillions by the bankers and those who depend upon financial fiddling like Cameron and Clegg, not to mention the creepy Blair, so much admired, it seems, in the Land of the Free. Please take him and keep him, treating him to the same torture that he and Bush have meted out in the world, by Bush’s own admission, when the US eventually gets to prosecute war criminals instead of sheltering them.