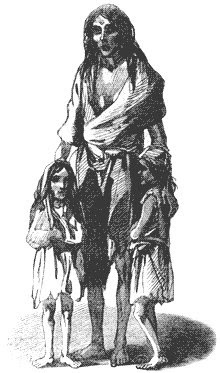 The Irish potato crop failed in 1845, 1846, 1848 and 1849, less than two present day lifetimes ago. A mysterious blight, now known as Phytophthora infestans, destroyed the potato harvest. The rural Irish poor, mainly subsistence farmers renting small plots of ground, were reliant on the potato as their staple food. The result was a dreadful famine in the United Kingdom—the Act of Union of 1801 had made Ireland part of the UK, then the most economically advanced place in the world. Huge numbers faced starvation, and 1 million Irish did die in “An Gorta Mór”, “The Great Hunger”.

Millions more fled the country, with the population of Ireland dwindling from around 9 million in 1845 to 6.1 million in 1851. The tide of emigration continued to swell long after the harvest failures—in 1866 Ireland’s population was roughly equivalent to its 1801 figure of 5.5 million. In comparative terms, the Great Irish Famine was one of the worst demographic tragedies of the nineteenth century and possibly the worst famine in recorded history when judged in terms of the mortality rate.

In Human Encumbrances: Political Violence and the Great Irish Famine, Dr David Nally, a Cambridge University academic, examines the political, economic and social context of the Irish Famine—throwing up disturbing parallels between what happened in the 1840s and what is happening in Africa today. From contemporary material, Nally drew out the perceptions that shaped political decision making and directly affected the lives of millions of poor Irish families. Such decisions are as relevant today as they were then, centering on the ethics of free markets and government aid. 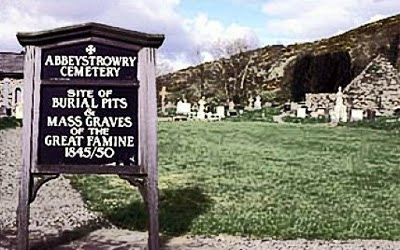 Nally’s book takes its title from a pamphlet written by the controversial English MP, George Poulett Scrope (1797-1876). In a scathing critique of British policies in Ireland, Poulett Scrope claimed that the Irish were being treated as mere “human encumbrances” to the long march of progress and agricultural development that was European modernity. Poverty was deserved coming from idleness, lack of intelligence, and improvidence, so Irish smallholders were eminently expendable to the English, and their way of life was backward, immoral and needed to be urgently reformed.

Contemporary reports noted distinctions at every level, between ruler and ruled, the “deserving” and “undeserving”, the indolent and the industrious. Even the food of the Irish peasants was seen in moral terms. The Irish were feckless and slothful, so ate potatoes, whereas the thrifty and hard working English ate wheat. Nally comments:

In terms of perceptions, not much has changed since the nineteenth century. Dominant economic institutions like the World Bank still consider poverty in the Global South in much the same way as the Victorians judged the Irish—the natives are fundamentally incapable of autonomous development and, in certain situations, corrective measures will be needed to stimulate social reform and promote agricultural development.

This tendency to “blame the victim”, as it has been described, allows rulers and élites to ignore the deeper injustices that expose populations to calamities—making disasters like famine more likely to occur in the first place—and to leave untouched the political and economic arrangements from which they clearly benefit. You could say that we are blinded by an ideology of poverty that the Victorians bequeathed to us.

A key phrase in Nally’s book is “structural violence”—describing how institutional arrangements can make entire communities vulnerable to famine, and at the same time impede reforms that build local resiliencies. For Nally, the current emphasis on increasing food production through market integration and technological fixes, ignores the well established fact that there is enough food to feed the world’s present population—recent estimates suggest that there is 20 per cent more food than the world needs. The relationship between food supply and starvation has long been a contentious issue, and the Irish Famine is no exception. Contemporary accounts describe ships carrying relief from England passing ships sailing out of Ireland with cargos of wheat and beef to be sold for prices out of reach to the starving population. Nally observes:

In an analogous way, Africa, a land synonymous with disease and starvation, is a major supplier of raw materials—including diamonds, gold, oil, timber, food and biofuels—that underpin the affluence of Western societies. The current focus on food availability and supply effectively masks how resources are unevenly distributed and consumed.

Famines not only destroy lives but whole ways of life. The culture and language of the Irish people were victims of the Famine. In 1800, half of the population spoke Irish, in 1900, it was 14 per cent. Rural social relations were disrupted, and, in particular, an ethic of mutual care that characterised the Irish way of life before the Famine. After the Great Hunger, Hugh Dorian, an Irishman, described his native Donegal as a place “where friendship was forgotten and men lived as if they dreaded one another”. Such descriptions stand in contrast to accounts of middle class farmers, and some English and Scottish settlers, who gained land and power by dispossession of the smallholders. Nally continues:

Famines leave behind a tense landscape of “winners” and “losers”. We ought to be honest about the fact that life and death decisions are woven into the texture of economic relations. Hunger persists because its presence serves an important function in the global economy—scarcity and abundance, privilege and suffering, are in fact mutually constituted.

To tackle global hunger we must therefore address the legal and institutional structures that directly restrict certain people’s ability to subsist. The reason that this is not done is because these same structures guarantee the high standard of living that many of us have become accustomed to.

As several observers of the Irish Famine recognised, hunger is not a natural disaster—it is a human induced problem that demands political solutions. Effective solutions require joined up thinking:

At present, the problem of “food insecurity”—to adopt the modern, sanitised term for widespread starvation—is generally conceptualised as a scientific and technical matter—geneticists and plant scientists will engineer harvests that produce more efficient, more abundant crops that are more tolerant of climatic stress, more resistant to attacks by pathogens, and so on. This, we are told, will be the basis for ending global hunger. While the physical sciences do have an important role to play, it is wishful thinking to believe that hunger can be avoided by simply turbocharging nature—that we can, if you like, engineer our way out of scarcity.

The food activist and writer Frances Moore Lappé maintains that the real scarcity we face is one of democracy, not food. Nally insists that there is an important truth to that statement, which is routinely ignored:

One is reminded of the French writer Guy de Maupassant who apparently used to take his daily lunch at the Eiffel Tower because it was the only place in Paris where he did not have to look at the imposing structure. We are behaving a bit like Maupassant—we can continue to enjoy “lunch as normal” as long as we maintain the fiction that hides us from the ugly truth that is otherwise staring us in the face.