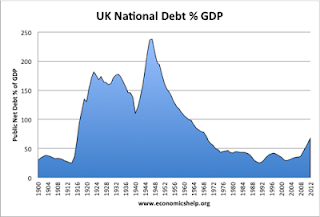 We hear all the time that we are deeply in a debt crisis with the national debt at grossly unsustainable levels, and that is why we have austerity and cannot afford the provisions of the People’s Charter. Is that so? Michael Meacher at his blog (michaelmeacher.info/weblog/) has given us some historical data that makes nonsense of those claims:


So the national debt when the welfare state and the national health service was introduced in the period of the post war Labour government under Clement Attlee was over 200%, and now it is less than half that. Now we cannot afford luxuries like welfare, but in the period of genuine austerity after a devastating war, we could. It follows that we can again, and we can afford the provisions of the People’s Charter, especially as we shall be getting rid of useless drains on the UK tax take like a nuclear submarine and absurdly generous taxation terms for the rich. Support the People’s Charter.