Should the Poor be allowed to Die, or the Rich? 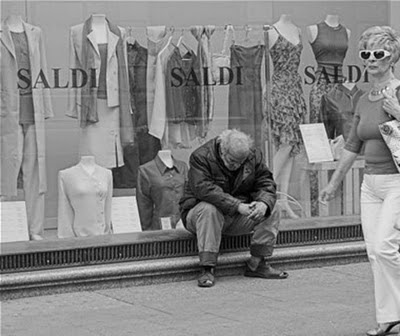 Al Dahler, a retired Air Force veteran highlights in the Virginia Newsleader the latest propaganda of Republican bloodsuckers. According to Robert J Samuelson writing in the Washington Post, America’s budget deficit is the fault of elderly Americans, people who are too greedy—they depend on social security and medicare to keep themselves alive. The Wall Street bailout had nothing to do with it. Irresponsible tax cuts for the 1 percent of Americans, who are already so well off they haven’t a clue what to do with their money, are also innocent of blame. The US permanent war economy, that has gotten worse since Bush and Cheney held the reins of power, naturally has no role at all in wasting the country’s wealth. The fault, according to the unspeakably selfish US right wing, rests with the poor and old folk, who should recognize they taking up some of the wealth that the rich could salivate over counting it again.

The poor have always been at fault. The conservative gospel is that the poor, the unemployed, the people unable to afford health insurance and the handicapped are scroungers, refusing to work to better themselves as all Americans should. Did they, the greedy rich? Some may have done but most have inherited wealth left to them by their enterprising fathers, grandfathers and even more distant ancestors. Far from money trickling down, the rich employ clever managers, not being clever enough themselves, to accumulate more money in exchange for a share of it called bonuses.

These rich billionaires have nothing in common with any of the remaining 99 percent of the population, but they fool those with aspirations to riches, many of the middle classes, and those unable to see that they are dupes of the rich, encouraged in their American Dreams, but with zero chance of ever realizing them. The Republican lie is that everyone is responsible for themself only and their immediate family, having no responsibility for anyone unable to work because they are elderly, sick or simply unable to get a job in the face of millions of unemployed better able and qualified than themselves.

These conservatives, so fond of boasting of their godliness, would have joined the crowds demanding the crucifixion of their “Lord” Jesus Christ, had they been there at the time. After all, this Jesus wandered around with a gang of ex-workers, ex-fishermen, ex-tax collectors and even ex-prostitutes, and, although described as the son of a carpenter, he never seemed to have built anything of wood himself. Moreover, he repeatedly backed the poor against the rich, so was obviously in the opposite camp from the parasites who drain us of our our fair share of the national product.

They have just enough religion to make them hate, but not enough to make them love others.
Jonathan Swift, paraphrased

If the Christian God were incarnated today, he would be organizing and addressing the OWS demonstrations, and once the state decides to clamp down on the occupiers of Wall Street, he as a leader would have had his death sentence again.

Veteran Dahler noticed that the sentiments of president F D Roosevelt were closer to those of Jesus than the odious hypocrites calling themselves Republicans. He said:

It is as plain as day that for the last thirty years the US has ceased to progress, and has instead slid backwards. Republican candidates, trapped by the hypocritical piety of the religious right, have to deny the validity of the theory of evolution, because these so-called Christians have decided that their God is so feeble He cannot bear it. Yet despite it they do believe in evolution applied to society. It is wrong that the cleverest and most ruthless ape should eventually have human brains, but it is right that the cleverest and most ruthless entrepreneurs should have all the wealth—give or take a percent or two. They call this application of “nature red in tooth and claw” to society “Social Darwinism”.

Society exists to protect each of us from the hazards of living separately in the wild. Being together allowed us to use our intelligence and our new found ability to respect each other and cooperate together to do remarkable things like building civilization. It required us to be concerned with others in our society even when they were not coping too well. Without assistance from us, they would have seen no sense in remaining with us, and our ur-band of mutuality would have soon fallen apart.

That is what these Republicans are advocating now. They have no concern for the poor and those unable to cope with pressures that most of the wealthy 1 percent could never imagine experiencing day in and day out. Jesus Christ ordered Christians to help the poor or be damned. But now Republicans cry in outrage that elderly people should have medical care as a reward for having contributed to society all their lives. They say they owe them nothing. Their idea of society owes them nothing. They have outlived their welcome and should do the decent thing and die! If they do not, then they will be charged large premiums to cover their health insurance, and as they will not be able to afford such expenditure, they will die in any case through being deprived of care. Limited health care leads to shorter lifespans, relieving the pressure on the social security system, and leaving more money for the rich to stash away.

President Obama and Secretary of State Clinton are fond of encouraging people in countries whose regimes they do not like, mainly because they assert their right to what is their own, to riot and even rebel, as in the case of Libya, to establish their basic human rights. Well, we have human rights too, and if Arabs have a right to rebel and kill their former leaders, H G Wells must have been correct to say that we have the same right. Wells, author of War of the Worlds, was a mild mannered man but wrote in despair, towards the end of his life, that we shall get nowhere in bringing about a fairer world until the rich were swinging from the lamp posts. Indeed, if it is a necessity in Libya, then why should it not be a necessity in the US? The fact is that revolution is one way societies end when they become too unjust. The greedy 1 percent of the USA are inviting their own destruction.

They could pay off much of the national debt themselves if they wanted to avoid it! 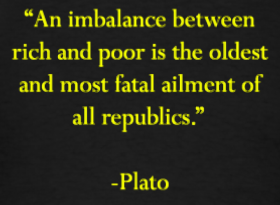