The 30 Year War Against The American Dream: Henry Schoenberger 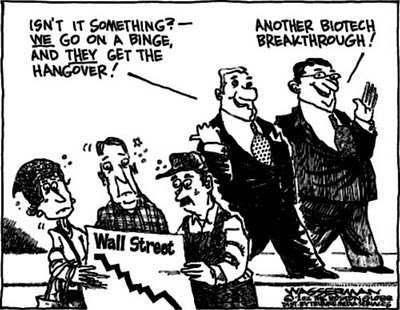 Henry Schoenberger, the author of How We Got Swindled By Wall Street Godfathers, Greed and Financial Darwinism, subtitled The 30 Year War Against The American Dream, points out that the OWS protests simply display the plethora of anger around in the USA. The level of poverty is now at its highest level ever—the poor are angry. The successful elderly planning on retirement after a lifetime of hard work are being hit—elderly retirers are angry. Young entrepreneurs, the foundation of our future economy, and those in their prime, whose enterprise should be creating new jobs to give a living to ordinary folk and a first step to the young—even many of those are angry.

Capitalism, as an economic philosophy, is only 200 years old, based as it is on the book by Adam Smith (1723-1790), the title of which is always given now as The Wealth of Nations, published in 1776. The United States declared its independence that same year.

Since then, the abuse and misuse of Capitalism has paralleled the use and abuse of Democracy.
Henry Schoenberger

Smith is often presented by right wing libertarians, Republicans, neoliberals, and assorted conservatives as the model entrepreneurial hero. Yet, he first held the chair of logic at Glasgow University, and then in 1752 became its chair of moral philosophy. So he was really one of those timeserving wasters lolling around a university with students and living off someone else's hard earned income! That, at least is how the right wing regard university teachers and research workers.

In 1759, he wrote the Theory of Moral Sentiments about the standards of conduct that hold society together, explaining how benevolent human motives and activities lead to a society beneficial for all, and thereafter a virtuous circle. Adam Smith had a lifelong interest in the value of morality for the public good. In his book, The Wealth of Nations, he expressed a belief that allowing the entrepreneur to pursue his own interest essentially unfettered would lead to the betterment of all because it would lead to the better use of resources, including time. He never imagined that his theories could be so distorted by the ultra rich cornering one particular resource to the detriment of most of the rest of us—money!

Darwin published his book on the Origin of Species 85 years after The Wealth of Nations, and, although most Protestant pastors in the USA and their theologians who run the Republican Party cannot now abide the thought of evolution, for the first century of so they loved it. The survival of the fittest was a perfect expression of capitalism. So Darwin's theory applied even within human society. It was not restricted only to the wild. 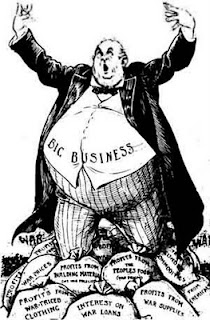 This extension of Darwinism into society was dubbed “Social Darwinism”. It even made it respectable for the protestant churches to abandon Christianity—Christ blessed the poor and damned the rich—but now Social Darwinism made it clear, they thought, that God meant the rich were blessed and the poor were damned! It was a creed that was soon attacked by social scientists, and began to fall into disrepute. Reaganomics and deregulation revived it.

We all need to know a little about economic theories to understand the fallacious arguments advanced today for unfettered greed. For thirty years after WWII, the rate of growth of the incomes of rich and poor were broadly the same. John Maynard Keynes, before the War had shown how economies can be controlled by regulation, such as using taxation to slow down growth when the economy was overheating, and feeding back into feeble economies some of the tax take to boost spending during recessions. It worked wonderfully well.

Controlling self interest worked for decades in the aftermath of the Great Depression. The top tax bracket went up to 90% and still the ultra rich survived, but so did our middle class and our society was not demoralized. There was enough concern on both sides of the aisle to pass Civil Rights legislation and CEOs did not earn more than 40 times the average wage in their industry.
Henry Schoenberger

Interestingly, it was a closer match to Adam Smith's teaching than libertarian capitalists like to admit. Smith knew that regulation was sometimes necessary, and did not pretend otherwise. He believed that once the boundaries were suitably set, and the operators accepted them, then they would work to better themselves and society as a whole through the so called “invisible hand”. The trouble is, when things work well, smug, greedy people always want to try their luck at extending the conditions to their advantage.

That is what Reagan in the USA and Thatcher in the UK tried in the 1980s. In what was imagined as an economic “Big Bang”, a bonfire of the regulations was arranged on both sides of the Atlantic, neoliberalism became the watchword, and Social Darwinism was born again. Survival of the fittest became survival of the richest. In the last thirty years, the workers and even some middle class have lost income, the better off middle classes have maintained theirs, and the rich have multiplied their riches several fold!

In 1776, Adam Smith could not have seen that unregulated Wall Street financiers enjoying tariff free transfer of money anywhere in the world could manipulate markets and the rewards they had from them to the advantage of themselves as a new Brahman class in the supposedly classless western societies. Greed became endemic. Like the living dead they sucked the economic life blood—money—from the middle and working classes. The insatiable greed and selfishness of the rich has killed millions and millions of jobs, people's savings, their livelihoods and increasingly their lives, quite contrary to the ideas of the capitalists' holy book, The Wealth of Nations, by their innocent prophet, Adam Smith. Henry Schoenberger sums up:

Government ought not to be the problem because it is the role of government to regulate, to ensure that the balance of society and its economy are right. Our governments neither guard the public good nor the public. The politicians lack all morality themselves, themselves infected with the zombie infection endemic among the rich and aspirants to riches, with the taste for more and more blood, salivating at the thought of more victims, us, and more dollars, ours.

Schoenberger points out that Goldman has inveigled the government at the highest level for three decades. The OWS movement should demand the removal of any Wall Street executive from any important government post, and equally that government servants should be banned from transferring their allegiance to Wall Street until 10 years after leaving government. Consulting and “Atlantic Bridge” style “charities” and think tanks should be illegal as soon as they get near to government in any direct way, or even indirectly, if the influence can amount to bribery, or any similar illegal approach. That applies too to lobbying, nothing more than approved bribery.

High Street deposit banks must be severed from the high risk investment banks. Bonuses should be illegal. As compensation they must be treated as pay and seriously taxed. Taxes must reflect the reality that 1 percent has 40 percent, so that taxation is at least fair by percentage, and preferably progressive, so that richer people should pay a higher percentage. If a rich man faced with a 60% tax rate gets a rise of $1 million, are we seriously to believe he would refuse to work rather than receive $400,000 after tax.

Schoenberger concludes it “is the time for a movement to kick out all members of congress who vote against jobs! And stop wall street godfathers from taking advantage of the 99% who do not practice unbridled greed!”