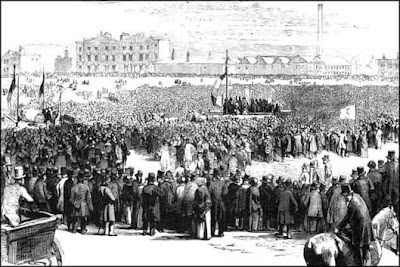 Tony Benn, who was a cabinet minister under Labour Prime Ministers Harold Wilson and James Callaghan, and represents the now disappointly small socialist wing of the Labour Party, has written in his diaries (published 1988):

As a minister, I experienced the power of industrialists and bankers to get their way by use of the crudest form of economic pressure, even blackmail, against a Labour Government (1). Compared to this, the pressure brought to bear in industrial disputes [by trades unions] is minuscule (2). This power was revealed even more clearly in 1976 when the IMF secured cuts in our public expenditure (3). These lessons led me to the conclusion that the UK is only superficially governed by MPs and the voters who elect them. Parliamentary democracy is, in truth, little more than a means of securing a periodical change in the management team, which is then allowed to preside over a system that remains in essence intact (4). If the British (or American) people were ever to ask themselves what power they truly enjoyed under our political system they would be amazed to discover how little it is, and some new Chartist agitation might be born and might quickly gather momentum.

In the present crisis these words mean more than ever: 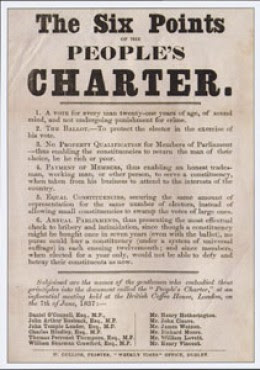 Benn himself had to fight to get a seat in the British House of Commons after he inherited—at his father's death and the previous death in action of his elder brother—the peerage his father had been awarded earlier for his public service. The constitutional point about this is that peers (Lords) were confined to the feudal House of Peers and were, for constitutional reasons, not allowed to stand in the commons. But nor were they allowed to renunciate their peerage to do so. Already an MP for ten years, Benn had tried to introduce renunciation bills to allow those, like himself, who did not wish to inherit a title, they personally had not earned, to renunciate their inheritance. Both houses refused them.

Benn had his parliamentary seat removed, and a by-election was arranged, for which Benn sought and received selection by his local constituency party. Benn then won with a vastly increased majority, but was not allowed to take his seat. Two senior judges were appointed to test Benn's case which was based on some precedent, but mainly on the fact that, in a modern democracy, a properly elected candidate ought to be able to take a seat if constituents had vote for him. The judges found Benn's case inadequate and his losing opponent was given the seat. There was such a public outcry that the government of the day had to introduce a bill allowing a peer to renounce his peerage and take up a legitimately elected seat in the commons. So Benn returned, convinced that the system was designed to maintain the status quo, but that concerted public action could change things.

Benn's call for a new Chartist agitation has been answered in the UK, where there is a charter movement, but unfortunately not strong enough, not least because the non-democratic media tell us nothing about it. Needless to say, the odious sociopathic crook, Tony Blair, partner in murderous crime of the pathetic G W Bush, gets every chance to defend his get-rich-quick policies such as the PFI, as it is called, which has driven large hospitals into bankruptcy and has doubtless put many other public enterprises into the red, all the better for greedy corporations to privatize them. 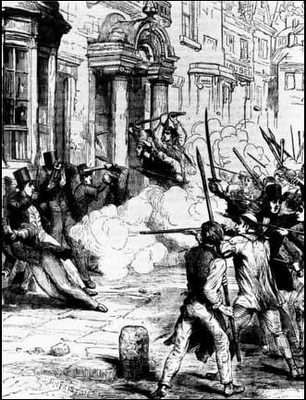 Benn elsewhere pointed out that the Labour party of 1935 proposed in its election manifesto to nationalize the banks. The crisis then was similar to the one we are experiencing now. The present one is, if anything, worse. Why then is there no demand by the Labour Party to nationalize our banks instead of putting our taxes directly into the share dividends of people rich enough to go without their unearned incomes for years, and still be rich?

There are millions times more people who are poor or only moderately well off, yet so many of them are deluded into thinking they are among the rich. The 1% is richer than most people can imagine, let alone sensibly defend as being in their own best interests. Support a people's charter. You'll probably find there is a charter group near you. If not, draw one up and get your friends and fellow workers to support it. If we do nothing look around the world at what our ruling classes are willing to do to others. Think you'll be any different when push comes to shove? Don't delude yourselves.