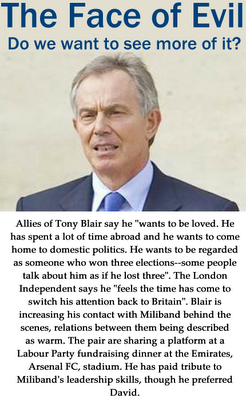 So democracy is about winning elections, is it? Ex UK PM Tony Blair’s friends think he should come back into domestic politics because he won three elections. So he did, but to what end? Richer rich! Poorer poor! Continuous warfare. Interference in the internal affairs of sovereign states. Evil is not a word normally in my lexicon, but this Catholic convert surely is it. He charms a gullible floating vote, and keeps a large body of Labour Party loyalists who stick to Labour even when it's policies are crypto fascist, if not fascist in fact, and then does what he wants because he is divinely appointed, it seems.

There is one place only for this man. In the dock alongside Bush and other supposedly “democratic” warmongers. If the British have any sense, we should shout aloud, “We do not want him anywhere in Britain”.