The US Garrison State 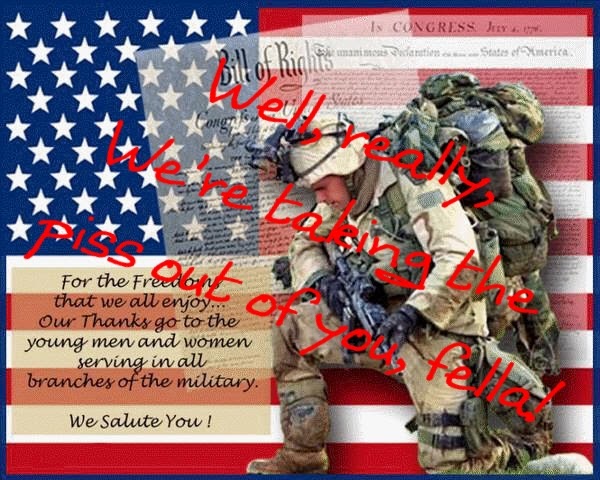 War has traditionally been seen as an evil by most people in every civilized country, but it has not stopped war in the past, and now by some curious transmutation of the human psyche, it is being accepted as necessary! Civilisation, Harold D Lasswell, proposed in 1937 is proceeding to evolve into the garrison society, and now that is getting more and more obvious that the so-called "Great Society" is doing it.


In the garrison state, the military state, all work is private yet is directed to the betterment of the ruling elite. Military discipline requires that no one can refuse employment. There is one choice only, to kow tow. Those who do not shall not be allowed the means of living. The garrison state becomes a military hive, with the drones supporting the "nobility", the wealthy and successful caste. It is a case of do your duty, accept corporate discipline, or die. Discipline is compulsory as an instrument of control in the garrison state. No discipline, no compensation and no welfare without working for it.


But when the rewards of contributing to society are negligible for everyone except the 1% and people have to work long hours for a pittance, then civilization was always impossible except for a restricted aristocratic one, and so it remains, or resumes. The 99% have to be sacrificed for the good of the few, and the lack of technical productivity of Labour has to be relieved by automation, a form of productivity which can add no value because no one is paid for it and which can therefore never add to the general betterment because no one except the mega rich have sufficient money to pay for luxuries.


In the old days of slavery and feudalism for there to be men with sufficient leisure for a mental life, there had to be others who were sacrificed—the slaves and the serfs. Of course, in the garrison state, this time has long passed and is no longer necessary because sensible socialist planning can ensure that everyone is provided for, but what is necessary is not the issue. What the ruling elite believe to be necessary for them is the issue, and that necessity means the 99% have to be sacrificed.


It would be possible now, in a wise economic system, for a few hours a day of manual work by everyone to produce as much as is necessary for the subsistence of everyone. And the central point, not appreciated by the rich is that it is natural for human beings to be satisfied once fear of starvation and insecurity is removed. The truth is that once people are content, no one in society should have the right to force them to labour for no significant additional reward. That is certainly what the 1% believe about themselves. Laziness is natural. Those who have no need of excessive labour to be content will not do it.


That is what the story of the Garden of Eden tells us. The earth has the fruits to feed us all, so long as none of us want more than our fellow humans. The point of the story is precisely that God does not reward greed. Those who were not content doing nothing in paradise were punished by God by having to work by the sweat of their brows outside it. Then the ruling class succeeded in enslaving the 99% so that the elite could live in their own paradise even outside Eden.


Most of the present day mega rich have not worked hard for their wealth. They have it from their ancestors who may have worked hard or more generally discovered a scam which they could use to rob those less well off, with the legal approval of their fellow billionaires. Now they retain their riches largely by employing people to look after it for them, and the dangerous people, those in the underclass are kept poor and dependent by punishing militarisation and inadequate pay.


Meanwhile most of the rich spend their time in mere amusement and pointless trivia such as trying to be celebrities, the money being inadequate for them because they also want approval. Indeed approval by their peers is all any of us should want. It is all any of us could get for 2 million years of primitive communistic society that preceded the agricultural society founded 10,000 or so years ago. And now the success of the capitalist class in defeating the socialist revolution seems to be leading to the permanent establishment of the militarised slave society—the garrison state—similar to those envisaged a hundred years ago by H G Wells.


The argument here is that there is nothing "natural" about this in the sense that we naturally evolved from hunter-gathering to being gardeners and farmers. Rather we are being forced in this direction by the concentration of wealth into the hands of a greedy elite class of mega rich who simply would rather see perpetual war than lose a cent of their riches.


What is curious is that these steps are taken in the name of democracy when democracy is the last thing this elite want. Political scientists and sociologists speak gratuitously of the “science of democracy” but it is only part of the kidology offered to the candidates for the gullible underclass. If any science needs to be applied to democracy as it is offered today, it is psychiatry. Ruling class pressure for the militarisation of the state and the apppreciation of everything in military terms is a mental illness driven by selfishness and greed. No science is needed for democracy. Democracy is not owned by a ruling caste, it belongs to everyone. We must take it. It is already ours


What has been appreciated by the leaders of the elite in their growing insanity is that an enemy common to the herd of subject people is no longer sufficient. People have been faced with Japanese threats, Nazi threats, Communists threats, Socialist threats, liberal threats, and now Muslim threats and the lesson learned is that a threat is not enough. There has to be a consequent war, and so we now don't just have threats, but the threat always become a war, even though mostly it is the US that starts and perpetuates the war. War scares that do not lead to violence lose their value. As Harold D Lasswell says:


This is the point at which ruling classes will feel that bloodletting is needed in order to preserve those virtues of sturdy acquiescence in the regime which they so much admire and from which they so greatly benefit.

What happens is that too long without a suitably violent “self-sacrifice” brings on feelings of guilt that people are enjoying themselves too much. It barely applies to those for whom the state is being structured but the news media direct it at the underclass of ordinary people. Factors in the garrison state justify a tendency towards sentimentality, repetitiousness, hardness and ceremonialization.


Those few veterans soldiers that have come to see through their indoctrination have recognised that the brutalisation of the training is meant to turn the soldier into an automaton. A simple but potent means of relieving fear is to be trained to carry out a routine at a word of command. Hence the reliance on drill as a means of disciplining men to obey unquestioningly without yielding to fear. Having been through some tough task repeatedly gives a soldier the confidence that it must be right for whatever has proved effective in maintaining self-control in previous trials will serve again. Ritual and ceremony is also a way of keeping distracted from fear. In the spider web of ceremony the ceremonialist finds an unacknowledged substitute for personal danger.


Trivial repetition and cermony are not the mains ones being relied upon though. That is the sacrifice of sons to war. The US have shed a lot of sweat in finding ways of using technology to reduce the sacrifice of the sons, our “boys”, the “heroes”, but the more effective it is, the less of a sacrifice it becomes! It is akin to the dilemma faced by certain parents in ancient Israel and Phoenicia told by the authorities that they were honoured by sacrificing their first born children to god. As Bertrand Russell put it:


The position of those parents who first disbelieved in the utility of infant sacrifice illustrates all the difficulties which arise in connection with the adjustment of individual freedom to public control. The authorities, believing the sacrifice necessary for the good of the community, were bound to insist upon it. The parents, believing it useless, were equally bound to do everything in their power toward saving the child.

But the power of ruling class propaganda and the right wing politics that it engenders has stopped most parents from complaining about the sacrifics of their sons. Quite the opposite most have again been persuaded it is an honour. Really, only when parents get immoveable about the wasteful sacrifice of their sons, and increasingly, their daughters to the Moloch of capitalist war will we be able to prevent being dehumanised by the elitist garrison state that threatens to overwhelm us.