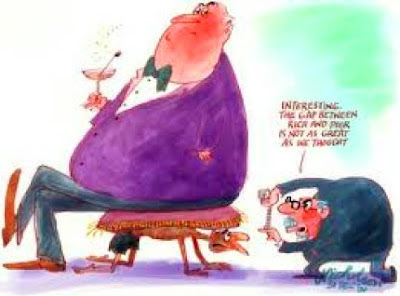 Our nation’s class war began as early as 1607 in Jamestown, Virginia, established by the Virginia Company of London—a charter corporation granted by King James. English, Scot, Irish, Dutch, Polish, German and other European immigrants were recruited as indentured servants, working up to five years to pay off their indenture. Children born to these servants themselves became servants along with their parents in exchange for room and board. Many of the indentured did not live long enough to complete their five years of servitude. But seeking to lower costs and increase profits to the colony owners and managers (the CEOs of the period) by 1619 the first African slaves were imported for heavy work, unpaid, of course.

Descendants of these slaves, along with more recently “acquired” slaves under “privatized construction contracts” built many of the buildings in our nation’s capitol, including the Congress, White House, and Supreme Court.

The Class War in America has never ceased, and when the pernicious abuse of workers by the ruling ownership class becomes even more overwhelming, people have risen up to plead for food, fairness, safe working conditions and sustainable livelihoods. When such pleads are disregarded and people realize their economic masters do not care about fairness, human decency or Democracy, eventually they have armed themselves with more effective weapons (under those circumstances) than the Bill of Rights, the U.S. Constitution, or any moral philosophy or religious teaching of human rights.

The Class War by the ruling ownership class has been won over and over for almost 400 years in America, and in most of the world, by those in control of wealth, natural resources, government at every level who write the laws which are then enforced by courts, police, private mercenary militias, secret police, FBI, DEA, CIA, and countless other police state agencies, and finally when all else fails to subdue the rebellious people—the army attacks its own citizens. In most nations today, national armies are created, funded and used to protect the ruling class from rebellions civilians rather than from attacking armies of other nations.

The economic situation in 2011 America

The increasing chasm between wealthy, middle class and poor Americans 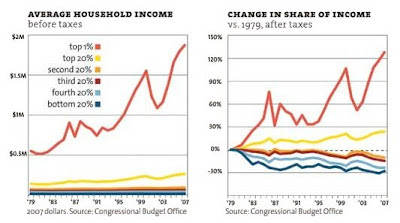 The truly rich pay less tax than all other classes

President Johnson’s 1960s War on Poverty was lost in the jungles of Vietnam, which cost at least one trillion dollars, and created a generation of disabled, traumatized and thousands of homeless veterans—many living in San Jose.

The economic safety net initiated by the FDR New Deal programs, generally successful in caring for the aged, disabled, widows and children until the 1980 Reagan War on the Poor, is now a tattered net with gaping holes that determined that many Americans are (unlike “banks that are too big to fail”) too sick, too mentally ill, too addicted, too criminal, too “feral” to save from living in the streets, eating out of garbage cans, sleeping in trash bins.

There is no national federal minimum wage, most states legislate a statewide minimum wage. In California the wage is $8 per hour. $8 per hour x 40 hours x 52 weeks is an annual wage of $16,640, but the 2011 Federal Poverty Level for a family of three is $18,530. Therefore a full-time parent in a real job earns almost $2,000 less than the poverty level!

But these wages are before all the deductions for federal, state, local, SS (wage) taxes, UIB, are taken from the worker. There are also exemptions from the minimum wages for part-time workers, trainees, extra help, restaurant servers, seasonal, farmworkers, children, and of course the undocumented who are easily exploitable. Many of our nation’s 3 million incarcerated prisoners are cajoled into prison labor not unlike the chain gangs of earlier times. There is also the underground economy filled with human trafficked wage and sex slaves.

Which class do you belong to?

Earnings from work, and not including assets such as property, financial investments—stocks and other income producing assets. 2005 earnings data, Dept of Labor:

Who are the very poor in our society?

The truly rich do not earn their money from labor of any sort, but from earnings on investments. The highest wealth in America is now inherited wealth—that is, based upon who your parents were—like back in the days of the founding of the nation. America is a land with a new kind of aristocracy—a corporate aristocracy based upon wealth amassed from corporate profits.

What are the lower and middle class workers to the megarich class?

We are worker bees, the drones that make or sell and certainly buy the products, who clean the offices and factories, and fight their wars. Also critically, it is the lower class and middle class who build and pay in taxes for the vast infrastructure that enables corporations to function: the transportation, energy, communications networks; the water and sewage systems; and the educational system that trains workers, managers and executives.

We also provide another critical function of society—the police and criminal justice system to keep public safety and prevent lawlessness or even insurrection, and the vast military to ensure the American empire continues to function in the world. Who fills these ranks?

The lower and middle class. Wealthy youth. George W Bush, Mitt Romney, Rand Paul, Michael Bloomberg, etc) never risk their lives as beat cops or rank soldiers, but for the lower class, these are considered good jobs with higher than low wages and the prestige of serving your community and your nation. 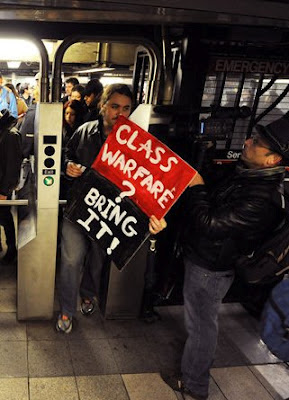 Current middle class wages are not enough to afford a middle class lifestyle of owning a home—even if it takes a lifetime to pay for it—sending your children to college, expecting some upward mobility. In the last five years, actual working class wages have remained constant while income for the top 1 percent increased 23 percent. Imagine such a raise in your wages. It is unlikely to happen. The “American Dream” project of the “Change to Win Federation” identifies four elements to the American Dream:

How many middle class Americans are certain they can achieve these goals? If we have an endangered middle class, then are we witnessing the eclipse of the American Dream?

Great post. However, I'm starting to think the "top 1%" label oversimplifies and demonizes some that don't deserve it.

I suggest we try these class categories: Dependent, Working, Rich, Crazy Rich. Right now the Crazy Rich are causing a lot of damage to our economy. I explain further at http://www.ragingwisdom.com/?p=79


Also, the growing awareness about the extreme income inequality and the very wealthy's grip on our political system indicate that some form of class war is all but inevitable. I am developing a set of ground rules for a possible class war that would guide it in a peaceful and productive direction. The Rules for the Class War begin at this post: http://www.ragingwisdom.com/?p=585 I am open to hearing everyone's comments and suggestions.