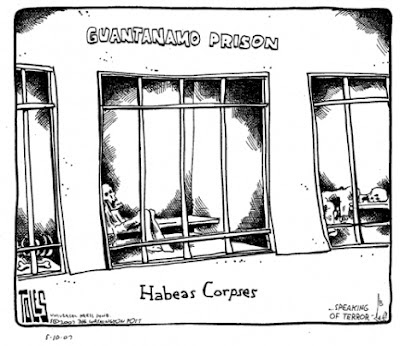 The fuss about Abu Qatada is nonsense. All of it is to work up popular opinion against the Human Rights Act, and the European Court. Other countries have no trouble with either, and the UK Minister of Justice, Kenneth Clarke, only last week said it had nothing to do with the human rights court, but everything to do with justice. Like all of those captives in Guantanamo Gaol who have received no trial but nevertheless are imprisoned indefinitely, Abu Qatada has had no justice, but has been locked up for seven years. Since when has it been legal to jail anyone for life on an unproven allegation. Only since the odious Bush puppet, Tony Blair! Blair broke a principle of the law by bringing in his version of the US Patriot Act.

Blair effectively abolished habeas corpus, a fundamental principle of British law for 800 years. It meant that no one could be detained without trial. If this man, Qatada, is a danger, and all the news media seem to know he is, then he should be tried. If he is persona non grata here, but other countries like the USA want him for suspected acts of terror, then he can be extradited to them. We are extraditing Assange to Sweden en route to the USA, and various naïve hackers to the USA where they can legally be incarcerated for life over petty offences, and about three million imprisoned blacks in US jails vouch for it. He can even be extradited to Jordan, his home country, because it has enshrined guarantees against the use of torture, and evidence produced by torture, in a recent act (in 2011) to assure Europeans it respects human rights, and to facilitate the return of people like him to Jordan. 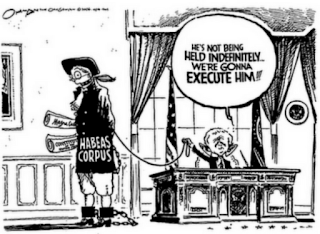 If the our secret services allege they have secret evidence that any of us are a danger to the public, any of us could be banged up indefinitely without proof of our guilt—because even if it exists, it is secret! Do not be taken in by emotive propaganda by the right wing media. It is in their interest to be able to jail anyone without evidence or trial. It is in our interest to have the protection of due process of the law.

Defend habeas corpus. It has saved thousands of people from arbitrary detention, and, if it goes, they’ll be able to bring back dungeons.