Primate Leaders Chosen for Popularity not Dominance or Aggression 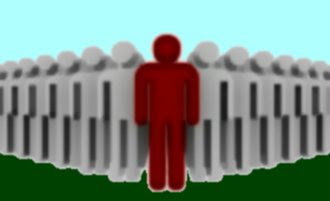 The best leaders of the wild chacma baboons of Namibia are the most sociable ones, those with lots of friends. Dr Andrew King of the Royal Veterinary College in the University of London, who led the study, wanted to know how groups of baboons manage to stick together when searching for food. When deciding where to eat, it makes sense for individual baboons to agree on where to go and then go together, otherwise they would lose the benefits of being in a group.

Initially the researchers thought the leaders’ grunting or backward glances might have been the cue that triggers the troop to follow. But it wasn’t. Baboons glancing back were less likely to be followed. These monkeys live in open country where looking and following may be more important than grunting, but in wooded and forested areas making noises might have been more important.

Nor did sex or dominance matter, even though the alpha male did tend to be more successful than most at initiating foraging trips. The troop do not automatically follow the dominant male everywhere. When any baboon sets off in search of food, the others may follow, depending on whether the initiator is popular in the grooming network. The troop is unlikely to follow less popular baboons. The alpha male might lead the troop but not because he is dominant or aggressive, but because he is popular. That in itself might be enhanced by his dominance and value as an ally. King et al likens it to humans being more likely to respond to suggestions by popular figures.

Social relationships are really important. Research by colleagues working with baboons in Kenya and Botswana has shown that female baboons who get on best with others tend to have more babies, and these babies are more likely to get to adulthood and have young of their own.
Dr A King

We humans are social primates. We choose our leaders nowadays by a popularity poll called an election, but we have no personal experience of the people we choose. We go by video clips and sound bites to judge who seems the most pleasant or dynamic, and since we very often find we are wrong within a few months, we know we are being misled more often than not. These men (mostly) have to seem nice, so have blindingly white teeth to match their rictus smiles, and are usually tolerably good looking.

The trouble is thast most of them are using us for their own personal gain, and not serving us as our representatives, as the founders of democracy imagined. Our real leaders are those rich enough to buy the politicians, have the power and money to do it, and the incentive to stay on top. They are the 1 percent. These people need to be controlled by law for democracy to work properly. That is the point of the revolution against our present bent system.