“Too Central to Fail?” Then Robin Hood Tax ’em! 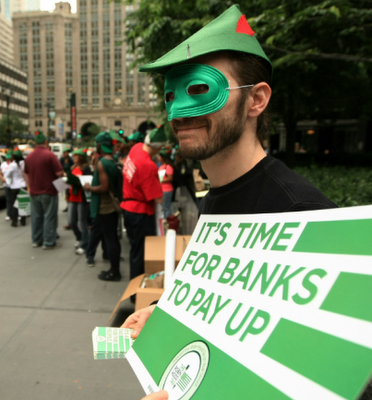 Sheer size is not the only indicator of importance for a financial system. Banks become “too big to fail” when their services are considered economically essential, so that the cost of their insolvency would be more than that of their rescue by the government. Even small banks closely networked with other financial institutions can pose the same level of risk as the big ones, though it is not so obvious. For this reason, the European Commission launched the scientific project Forecasting Financial Crisis (FOC). Its aim is to understand and forecast systemic risk and global financial instabilities.

A paper by four economics researchers, Stefano Battiston, Michelangelo Puliga, Rahul Kaushik and Paolo Tasca at the ETH Zurich Chair of Systems Design, together with Guido Caldarelli of IMT Lucca (Italy), under FOC auspices, went beyond evaluating how banks can be “too big to fail” by developing a “too central to fail” approach.

They analysed Federal Reserve data using a new “network research” method. The data originate from the “emergency loan program” from 2007 to 2010, through which the Fed provided “cheap” (ie free! our! public!) money to financial institutions in the USA that were acutely at risk of defaults. The Federal Reserve only published the figures after the US Supreme Court granted the Bloomberg business, financial information and news company the right to inspect the data, since the American financial system had, after all, been restructured using public funds. The data sets from the Federal Reserve, and Bloomberg, document the residual outstanding debts and the market capitalisation of a total of 407 financial institutions that borrowed emergency “loans” from the Fed. The size of the “loans” indicates a bank’s individual debt to equity ratio, and of any potential distress or defaults.

At the height of the crisis, the total amount of “loans” granted climbed to US$1.2 trillion! The assessment of the Federal Reserve data showed that, although the various banks got into difficulties at different times, around 30 banks reached their peak instability simultaneously at the height of the crisis. Over the duration of the emergency loan program, the number of top borrowers at any given moment was around 20.

From PageRank to DebtRank

Between 2008 and 2010 a total of 22 banks formed the innermost circle of the financial crisis. They were so intensely connected with each other through credit relationships, mutual equity investments and financial dependencies that the distress of any single one of them could endanger the entire financial system. The ETH Zurich researchers therefore turned their focus towards the 22 institutions that had received more than US$5 billion in emergency “loans” over the crisis period. The top borrowers from the Federal Reserve included the US branches of the two major Swiss banks, UBS and Credit Suisse, which had outstanding debts to the Fed amounting to US$13.89 billion (UBS) and US$13.29 billion (CS) between 2008 and 2010. This put them in 6th and 7th places among the top borrowers.

The main new feature in the ETH Zurich economists’ approach was their methodology. To discover how the distress of a tightly networked financial institution impacts on other banks and spreads through the network, they combined the finance notion of balance sheet contagion with methods from network science, including the principle behind the well known “PageRank” algorithm at the heart of the internet search engine Google. The score of a webpage depends, recursively, on how many other important webpages point to that webpage.

The ETH Zurich researchers introduced the “DebtRank” as a measure of the systemic importance of an institution, it being higher when its distress affects other important institutions. DebtRank serves as a recursive indicator of a bank’s level of networking and thus its systemic importance. This recursivity can be solved mathematically yielding a number measuring the fraction of the total economic value in the network that could be affected by the default of an institution.It allows an estimation of how central a bank’s position is within the financial system, and what risk it poses. Stefano Battiston explains:

Many economists regard today financial systems as complex networks, in which the financial institutions constitute the nodes and the links between the nodes represent the banks’ financial dependencies.

The results of the methodology in the interval studied can be seen interactively at http://ethz.focproject.net:8080/widget.

In November 2008, the emergency loans granted to just these 22 banks by the American Federal Reserve to protect the American financial system from collapse amounted to a total of US$804 billion. The interdependencies among these banks were so strong that a small shock to the system as whole could get amplified into a systemic default. Thus the US Federal Reserve could not have allowed them to fail without creating serious consequences for the economy. Over a $trillion in loans saved them and the others left out of the study, and according to these theories or excuses, “us”, from financial meltdown, but when do “we” get our money back from these mega rich who can bankrupt whole countries rather than lose their bad investments? What these researchers have shown is the network of futile transactions that generate money for the bankers out of electric current and electromagnetic waves! These transactions generate money for the rich even though the world is in a deep depression. These interbank networks need to be taxed. A “Robin Hood tax” on these transactions even at a minute level can generate for the federal treasury all the money it has given away, with no one suffering or even noticing except the bankers and other financial manipulators. Robin Hood tax ’em! Now! Demand it.