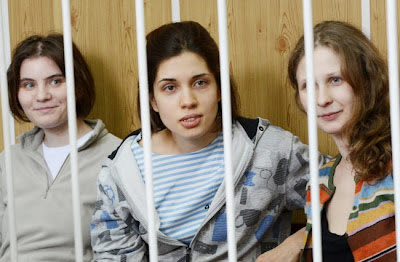 Universally admired, Pussy Riot (or PR for short) have been promoted as superstars. But what are they? A rock or punk group they are not. A British journalist marvelled: they produce no music, no song, no painting, nada, rien, nothing. How can they be described as 'artists'?

The US State Department paid for the PR group's first video, and The Guardian kindly produced it!

On the day that three members of the Russian punk-activist group Pussy Riot were sentenced to two years in jail for the charge of 'hooliganism driven by religious hatred', they earned a few new fans as well. First, the other members of the band released a new single online, 'Putin Lights Up the Fires'. The Guardian newspaper in England compiled clips and stills for an accompanying video, and the song could be a post-sentencing rallying cry for the millions of music fans and free-speech advocates following the case.

The three self publicists will come out of jail inside two years and will get a world tour, supported by Madonna! The future returns will be well worth a couple of years in nick. And is two years excessive?

Two years’ sentence is quite in line with prevailing European practice. For much milder anti-Jewish hate talk, European countries customarily sentence offenders to two-to-five years of prison for the first offence. ... Western governments call for more freedom for the anti-Christian Russians, while denying it for holocaust revisionists in their midst.

Israel Shamir, "The Secret History of Pussy Riot", Counterpunch
Posted by AskWhy! Blogger at 1:57 AM