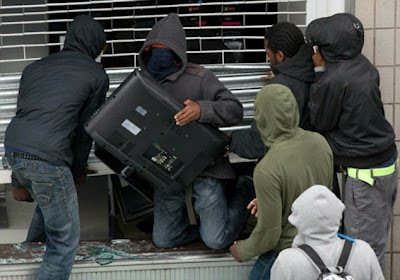 As long as the politics in England go in the same direction as we have experienced in the last years—disrespecting people’s everyday needs, demolishing the idea of the public, and strengthening consumer capitalism—the pre-conditions for a new political revolt are a given. It’s just the question of another “trigger” like the death of Mark Duggan on August 4 last year.

Much commentary regarding the cause of the riots has focused on the “opportunism”, but Professor Kessl thinks this takes many forms, the opportunity to…

One observer said, “it was about just being visible.”

Kessl believes the riots are symbolic of changes occurring in society, and unless the problems are addressed, it is only a matter of time before further riots occur. Unless the underlying social causes of the riots are tackled politically, August 2011 will happen again, and the Government’s reliance on severe punishment will not stop it:

The extraordinary dimension of punishment—especially in regard to the sentence of young people made by some courts—symbolises the logic of the policy of the current administration. It is authoritarian, not interested in a proper discussion of the context of the riots—present day English society. Fortunately discussions take place anyhow all around the country between those engaged in them, youth workers, artists, researchers, local administration, and so on. This can be a good starting point for a different future politics…