People: Let this be the Final Crisis 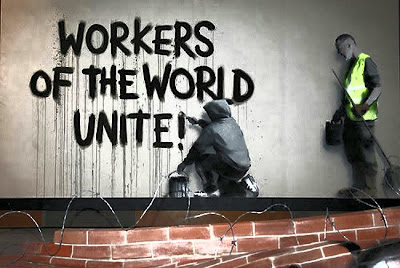 Capitalist society in England stood at a parting of the ways. The crisis was far more than commercial and industrial—it was a profound social crisis, a turning point in social development. The times were apocalyptic. All social values were being re-valued. Society was racked by the civil strife of the “two nations”. The air was full of doubts and questionings and suffused with the…

…deep wrath of the whole working class, from Glasgow to London, against the rich, by whom they are systematically plundered and mercilessly left to their fate, a wrath which before too long as time goes by—a time almost within the power of man to predict—must break out into a Revolution, in comparison with which the French Revolution, and the year 1794, will prove to have been child’s play.
Condition of the Working Class in England, 17

This startling sense of imminent social upheaval, this feeling that we stood face to face with a crisis, solvable to all appearances by force only, was not the exceptional apprehension of the great revolutionary. It is to be found running through the literature of the period. It was the theme of all serious thought and utterance on social affairs. It runs through the pages of Disraeli, Carlyle, Kingsley, Gaskell (who was prophesying revolution as early as 1833), John Stuart Mill:

I cannot think that the working class will be permanently contented with the condition of labouring for wages as their ultimate state… It is not to be expected that the division of the human race into hereditary classes, employers and employed, can be permanently maintained).

And it was symptomatic that The Times of London found it necessary to thunder editorially:

War to the palaces, peace to the cottages—that is a battle-cry of terror which may come to resound throughout our country. Let the wealthy beware!

It seems that as long as the people who do the work in our society will not learn from history they are doomed to repeat it. This is not a description of the present crisis but one of England in the 1840s, edited lightly from Allen Hutt, The Final Crisis, (1935). At least two similar major periods of economic crisis, paid for by the people who are employed in unemployment or wage cuts, have interverned between the 1840s and today—four crises in 170 years, yet those who suffer to pay their price simply accept the lies of the rich, and continue being exploited. Isn’t it time that people who have to work for a living—us!—pulled the rug from beneath the idle fat cats who purport to rule us? To do so we first need to recognize that we are being made fools of, and then to do what The Times saw as a likelihood: