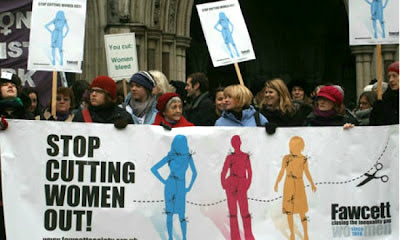 A study by Dr Hazel Conley, from the School of Business and Management at Queen Mary College, University of London and a member of the Centre for Research in Equality and Diversity (CRED) analyses the 2010 Fawcett Case. It finds the UK government has failed to apply laws that protect working women in the wake of the economic crisis. The paper also shows that equality legislation has created opportunities for women’s rights groups besides trades unions to influence industrial relations.

A legal challenge to the 2010 emergency budget was made by the Fawcett Society—an old established feminist organization which campaigns and lobbies for equality for women—on the grounds that it would have a disproportionately negative impact on them. It attempted to get a judicial review of the ConDem coalition’s new austerity drive.

It argued that 72 per cent of public sector cuts announced would be met from women’s income, as would £6bn of the £8bn savings generated in one year. Dr Conley explains:

In addition to these measures on public sector employees, the majority of whom are women, child welfare benefits were frozen, Sure Start maternity grants limited to one child and child tax credits significantly reduced. Poor mothers and women from black and ethnic minorities were the main financial losers.

The overlapping roles of the state as legislator, employer and paymaster, all seem to have had a bearing on the Fawcett Society challenge and its outcome. Before the budget was unveiled, gender equality duties were introduced as part of the Equality Act 2006. These duties were regulations that required public authorities actively to remove unlawful discrimination and inequality from their practices and processes. Failure to enforce could have resulted in a judicial review.

The article draws on documentary evidence, including the Fawcett case judgment produced by the Royal Courts. In the transcript’s opening sections there is a government admission that it had not undertaken the duties’ legally required equality impact assessment of the budget. Despite this legal compliance failure, the Fawcett challenge did not secure a judicial review. Dr Conley says:

The state is the UK’s largest single employer and the judiciary is not class-neutral. Being armed with reflexive equality legislation did not provide Fawcett with any additional powers to challenge the state machinery. The enactment of equality duties and the provisions for enforcement would seem to suggest the government’s commitment to change. In the aftermath of the banking crisis, however, the coalition unleashed a political zeal for economic austerity that has been unrelenting since it took office. If the Fawcett challenge had succeeded the impact would have been momentous. The emergency budget would have been declared unlawful and the new and fragile coalition government would have been rendered virtually paralysed. The government and the judiciary appear to have moved to protect the interests of capital at the expense of working women. There is a clear gap between rhetoric and compliance in this specific but crucial case.

In spite of the High Court ruling, the Fawcett challenge fuelled an intense media debate on the inequality of the budget, particularly in relation to the loss of jobs in the public sector and the ensuing impact on women’s working lives. One tangible outcome of the challenge was that the government produced an equality impact assessment of sorts for the 2011 comprehensive spending review and budget. Another is that, because the Fawcett case failed, the problem is being pushed down to local government and, as the public sector budget cuts continue to bite, equality groups are applying for judicial reviews against several local authorities axing services.

The actions of the Fawcett Society, says Dr Conley, provide empirical evidence that challenging the loss of thousands of public sector jobs need not lie solely with trade unions. Although in the Fawcett case this is likely to complement rather than compete with the role of the unions in industrial relations. Dr Conley warned that equality duties have opened up important ways for “new actors” such as Fawcett to use the law to challenge inequality at work, but “they do not meet their potential if the enforcement mechanisms can be undermined and weakened to suit political and economic objectives”.