New Labour Thinking? More Bull from the USA, No Socialism! 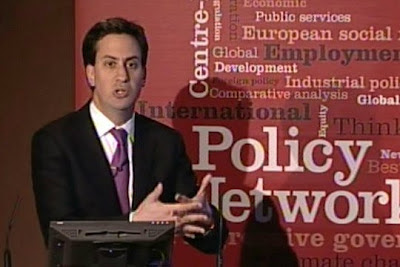 Stock Exchange Speech: So, this is Miliband’s “new thinking”:

A responsible capitalism is a resilient capitalism… Predistribution is about saying that we cannot allow ourselves to be stuck with permanently being a low-wage economy. Our aim must be to transform our economy so it is a much higher skill, higher wage economy. Think about somebody working in a call centre, a supermarket or in an old people’s home. Redistribution offers a top-up to their wages. Predistribution seeks to offer them more. Higher skills, with higher wages, and an economy that works for working people.

We've heard all that baloney about a high wage, high skill society 30 years ago. He added that “the move toward a more responsible capitalism is actually being led by many business people”. The Labour leader is importing US jargon that baffles most people in Britain. What do predistribution, the squeezed middle, and responsible capitalism mean?

Predistribution was dreamed up by US academic James Hacker. It actually means no more than that people would not need benefits (redistribution) if they were paid a decent wage (predistribution)! Who are the “squeezed middle”? Despite the sound of it, it means the working people are the ones who are squeezed. US politicians speak of the “middle class” when they mean the working class to kid workers into thinking they are not the bottom rung of society.

Responsible capitalism? To whom is it responsible? Business leaders are responsible only to shareholders, the people who get the dividends if any profit is made, or handouts from our taxes otherwise! Have we already forgotten the banking crisis? Capitalists have only one interest—themselves.

Miliband’s speech at the Stock Exchange confirmed that New Labour remains the New Labour of Tony Blair, an alternative capitalist party to the Tories and Lib Dems. There can be nothing socialist in the principle that only the private sector can run the economy. Miliband has noted that ConDem ministers have been loudly booed in public, but still does not get it. He should pledge to expand public ownership.