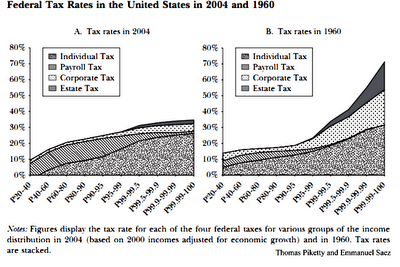 The 1960 federal tax system was progressive even within the top percentile, progressing from an average tax rate of around 35 percent in the bottom half of the top percentile to over 70 percent in the top 0.01 percent. The super rich were heavily taxed, yet post-war the economy was booming. How was that possible when taxation of the rich, we are told, stops them investing in job creating ventures?

Well, the greater progressivity of federal taxes in 1960 compared with 2004 comes from reducing corporate income tax and estate tax. Corporate tax (taxation of capital income) collected about 6.5 percent of total personal income in 1960 but only around 2.5 percent today. Taxation of capital hit the top income groups because capital is concentrated in that tiny fraction of the population. Estate tax also decreased, from 0.8 percent of total personal income in 1960 to about 0.35 percent today. The decline in these two taxes has given the wealthy percentiles of the population a big boost over the forty years being considered.

Knowing that their capital income was being taxed meant it paid the wealthy in the long run to reinvest in the firm rather than taking income, but building for the future. Taxing the rich is better even for the capitalist. It makes them do what they are supposed to do—invest! Investment creates jobs!

Labels: Tax the Rich, Taxation, US